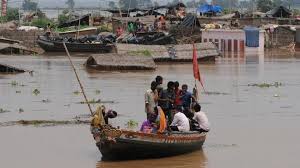 After a long time, the Bihar government is going to undertake a massive exercise to revise the danger mark level of all major rivers in the state to make flood-fighting work more effective and reduce chances of false alarm of impending floods in case of rivers in spate in flood-prone districts.

The Bihar State Disaster Management Authority has recommended the idea of redefining the danger level of all major as well as small rivers after a study done on the subject over the last one year.

“As the river bed of all majority of rivers has risen over the past many decades due to siltation, the danger level indicators are not so accurate. It often leads to false alarm of impending floods when in reality the river is flowing much below the danger mark. So, a reassessment of the danger level of major rivers is imperative,” said Vyasji, vice-chairman of the state’s disaster management authority.

In Bihar, there are 12 major river basins, including Ganga, Mahananda, Kosi, Bagmati, Sone, Karamnasa, Kamla, Chandan and Gandak, besides a large number of small rivers and their tributaries.

Sources said the state’s disaster management authority had already directed the water resources department and written to the Central Water Commission ( CWC) to start the work, which is going to be a time-consuming exercise. Sources said the government had been given the time to complete the exercise in next couple of months so that the new system comes in place before the rivers go in spate in the state.

The gauge readings of rivers is different from one point to another.

Like in Patna district, the Ganga’s gauge reading is different at Hatihdha , Gandhi ghat and Digha, said Vyasji.

“The gauge readings are different at many points of rivers and it has to be examined based on different parameters. Besides, the siltation of the rivers will be also taken into account in assessing the danger mark,” he said.

Ganga and Kosi are the major rivers in the state facing heavy siltation and efforts have been made to reduce the sedimentation to lower the river bed.

Kosi deluge in 2008 was one of the worst disasters in the state’s flood history in recent decades. Various studies on river management have put emphasis on regular dredging to reduce the siltation and check floods.

Besides, the disaster management authority also believes the revision of danger mark level of all major rivers, including where barrages have come up, would help check instances of false alarm of floods.

“Whenever a river gets swollen either due to heavy rains or heavy discharge from upstream, panic grips people residing nears the rivers and the administration also starts gearing up resources for flood fighting. But in reality, such alarms are false many a time. So a revision of danger mark of rivers is need of the hour,” said Vyasji.