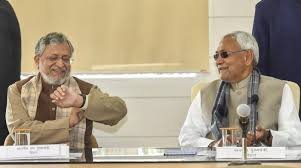 The Opposition in Bihar, still smarting under the crushing loss in all but one seat in the Lok Sabha polls, seems to be bogged down with too many ideas when it comes to fighting the Assembly polls next year, when it will face the formidable NDA once again.

Veteran RJD leader and former union minister Raghuvansh Prasad Singh on Friday again called for a merger of all the regional parties in the bloated and loosely-knit Mahagathbandhan – a view that has few takers even in his own party.

Hindustani Awam Morcha, a smaller constituent, reacted with sneer with its spokesman Danish Rizvan, remarking “Merger is a good idea. We would welcome it if RJD and other constituents agree to merge with HAM”.

Notably, HAM founding president Jitan Ram Manjhi, a former chief minister, has been threatening the grand Alliance that he would quit and go it alone in the Assembly polls if his demands are not accepted.

Manjhi’s demand is that if the grand alliance wins, it should have two Deputy CMs, besides the chief minister and these posts should be held by one candidate each from the extremely backward classes, the Scheduled Castes and the minorities.

The formula suggested by Manjhi virtually rules out the possibility of accepting the leadership of the Tejashwi Yadav, Lalu Prasad’s younger son or any other member of his family which controls the RJD, who belong to a powerful OBC caste.

RLSP chief Upendra Kushwaha, a former NDA constituent who switched sides less than a year ago, has suggested that the grand alliance should be expanded to include other entities like the Left parties.

The Left parties, which are seen as a spent force in the state, have so far shown little interest in the proposal.

Amid this deluge of political strategies, Congress MLC Prem Chandra Mishra has warned the alliance members about the lurking threat from a recently formed front of a number of disgruntled leaders, which will benefit only the NDA.

The Bihar Navnirman Morcha was formed a fortnight ago by former state ministers Narendra Singh and Renu Kushwhaha, previously with JD(U) and BJP respectively, and Arun Kumar, the former RLSP MP from Jehanabad.

Speculations are rife that Rajesh Ranjan, alias Pappu Yadav, may also join the front as he has been disowned by the grand alliance and spurned by the NDA.

“All these leaders who have formed the Morcha, as well as those who are expected to join, wield influence in their respective areas. The social equation is such that if they enter the fray, they will cut into the votes of the grand alliance and benefit only the NDA. Something needs to be done about it, said Mishra.