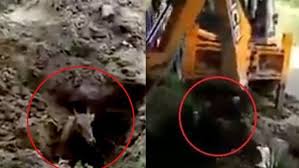 The police in Bihar’s Vaishali district have filed a first information report against the driver of an earth mover used to bury an injured nilgai, The Indian Express reported. However, no arrests have been made yet.

The video has been circulating locally since August 30. It drew widespread outrage on Thursday. The earth mover is seen pushing the injured animal into a pit and burying it with mud.

The video was shot in a village under the jusrisdiction of the Bhagwanpur police station. The officer in charge of the station, Chandrabhushan Shukla, said: “We have booked a JCB driver on complaint of Lalganj ranger.”

The animal was shot by a Hyderabad-based shooter hired by the state environment, forests and climate change department, unidentified police officials told The Times of India.

“A drive was being carried out in the district to kill nilgais, but they were to be buried after proper culling,” Shukla told the newspaper. “This animal was, however, buried alive. The farmers were facing crop loss due to increasing population of nilgais in the district. Accordingly, a committee under the chairmanship of district magistrate had ordered culling of nilgais by hiring a shooter.”

Vaishali Divisional Forests Officer Bharat Bushan Pal told The Times of India that 495 nilgais were culled by the department between August 27 and August 31. “A forest guard has been suspended in the matter,” he added.

District Superintendent of Police Manavjit Dhillon ordered an inquiry on August 30. Several reports had suggested that Lalganj MLA Rajkumar Shah witnessed the incident. However, Shah told The Indian Express that it was a rumour. “I am not the Vaishali MLA,” he added. “I represent Lalganj and had no business to go there. Let the district police look into the matter.”