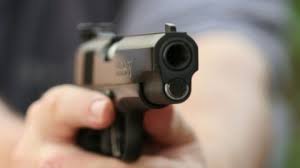 The bike-borne criminals identified as- Sushil Sah and Ashok Kamat- fled from the spot after pumping two bullets in the scribe’s stomach, the SHO said.

Mandal, who was associated with a national Hindi daily (Dainik Jagran) as its Pandaul block stringer, was rushed to Sarsopahi primary health centre where doctors declared him brought dead, the police official said.

Prima facie it seems to be the case of an old enmity between the slain media persons and the attackers, the SHO said.

The two miscreants have criminal antecedents as both have been named in a criminal case lodged with Bhairav Asthan police station of the district.

The body has been sent to Madhubani sadar hospital for autopsy, the SHO said.

Condemning the murder of the journalist, opposition RJD demanded immediate arrest of the criminals.

“I strongly condemn the killing of the journalist in Madhubani. This is the glaring example of deteriorating law and order situation in the state. Democracy will be in perils if people, who work as a watchman of democracy, are shot dead by criminals.

“Journalists are the mirror of the society and it is the first and foremost duty of the government to protect them. The administration arrest criminals immediately,” RJD legislator and spokesman Shakti Singh Yadav said.