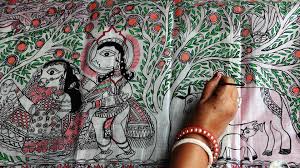 Bihar has hot summers and cool winters. It has a vast stretch of fertile plain drained by the River Ganga, including its northern tributaries Gandak, Koshi and Bagmati that regularly flood parts of the plains. Other rivers in the state are Falgu, Ghaghra, Durgawati, Sone, Punpun, and Karmanasa. Central parts of Bihar have some small hills, for example the Rajgir hills near the city of Rajgir.

Madhubani art, a form of painting that is world famous, is practised in the Mithila region of the state. Maithili music too orginates from the same region. The classical music in Bihar is a form of the Hindustani classical music. Gaya is another centre of excellence in classical music, particularly of the Tappa and Thumri styles. The Bihari thali consists of rice, roti, pickle, chutney, lentils and milk products. Llitti Chokha is a popular fast food.

Chatth Puja Almost all civilisations worship the ‘sun god’, but it has a unique form in Bihar. Chatth Puja is the only occasion where the setting sun is worshipped. For this four-day festival, people maintain sanctity and purity from even a month ahead.

Banyan, peepal, and palmyra palm trees are found in abundance. The forest regions are home to species of large mammals like Bengal tigers, leopards and elephants. Crocodiles are abundant along the Kosi river.