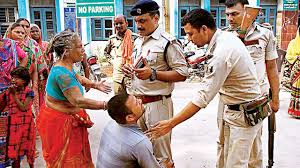 Five people were killed in a spate of mob lynchings in four days in Bihar. Recently, there has been a rise in cases of mob violence in the state, raising questions about law and order. The latest incidents were reported from Chhapra and Vaishali districts.

The first incident took place on Thursday, July 18 in Chhapra when enraged villagers beat three thieves to death. Apparently, all three were known for stealing cattle from the villagers. The father of one of the victims has demanded rigorous punishment for the accused. The police have taken cognisance of the matter and taken eight people in custody.

Subsequently, three incidents took place on Friday, July 19, in Vaishali and Bhojpur. In two separate incidents in Vaishali, villagers brutally thrashed a robber while he was trying to flee after looting a bank.

Another incident happened on Sunday, July 21, when a mob of angry villagers attacked and killed a youth. According to the villagers, the young man was punished for murdering a girl. The situation in all these villages remained tense as on Monday.

Meanwhile, the opposition attacked the Nitish Kumar-led JD(U) government over the “deteriorating” law and order in the state. Leaders belonging to RJD demanded an answer from the government, while BJP legislator Jeevesh Mishra said, “The people of Bihar are taking law in their hands out of frustration. However, this is not right. They should hand over the accused to the police.” He also said that the state will have to take necessary steps.