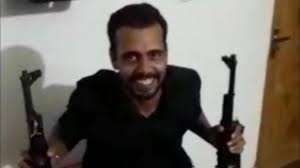 Two members of the dreaded Viveka Pahalwan gang in Bihar were arrested after they were caught on camera brandishing two AK-47 rifles a few days back.

Both members, Vicky and Chandan, were arrested from Mokama in rural Patna days after a video of them wielding the assault rifles went viral.

Police had earlier registered an FIR against both the henchmen of muscleman Viveka Pahalwan, who is considered as the biggest rival of Anant Singh, who is an independent MLA from Mokama.

Local police had been carrying out searches in Mokama and in neighbouring areas to trace the duo over the past few days.

However, the police team led by ASP Lipi Singh finally managed to trace Vicky and Chandan having tea at the local railway station, following which they were arrested.

Several reports suggested that Viveka Pahalwan claimed that the AK-47s wielded by his henchmen were not real but made of plastic.

Authorities have taken both the henchmen to an undisclosed location and are interrogating them regarding the whereabouts of the AK-47 seen in the viral video.

The fresh arrest of the henchmen could help in tightening the noose around local gangsters operating in the Barh-Mokama area in rural Patna.