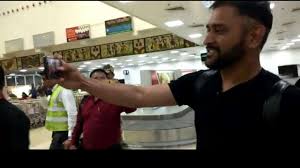 Lieutenant Colonel Mahendra Singh Dhoni reached his home town Ranchi for the first time after serving the army in Jammu and Kashmir after the World Cup.

Upon his return late in the evening, the wicketkeeper-batsman was spotted taking selfies with fans at the airport.

He later drove back in his new Jeep Grand Cherokee along with wife Sakshi. It is the same vehicle which Sakshi had posted about saying, “Welcome home #red beast! your toy is finally hear missing you @Mahi really missing you”.

However, before his return, Sakshi took to social media about the electric shortage in her area.

She updated her Instagram status and showed that there is no festival nor bad weather, yet there was no electricity for the past 5 hours.

Sakshi had also posted a picture of a part of the house in Simaria in her status on Instagram.

As for Dhoni’s cricket career, the player’s retirement has been the talk of the town with speculations keeping on rising with each passing day. He was not part of the West Indies tour by choice but is also not part of the South African series at home.