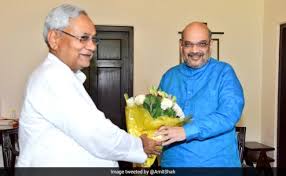 PATNA: Nitish Kumar will remain the Chief Minister of Bihar after the 2020 assembly election, which the BJP will fight under his leadership, the party’s national chief Amit Shah has said. “The Janata Dal (United) and the BJP will go to polls together and we will fight polls under the leadership of Nitish ji. This is absolutely clear,” the Union Home Minister said in an interview to News18 on Wednesday.

Nitish Kumar’s Janata Dal United and the BJP are in a coalition government in Bihar. Leaders from both sides have often aired passive aggressive views over who would lead the election battle formation in the eastern state. Amit Shah’s assertion is likely to put to rest any speculation over who will lead the alliance campaign.

Mr Shah admitted there were some differences over who would lead the campaign. But he added that in collation politics, differences are signs of a healthy relationship and there should be no “manbhed” (argument) on this.

Bihar’s Deputy Chief Minister from the BJP, Sushil Kumar Modi, has already said that the National Democratic Alliance (NDA) will contest under Nitish Kumar’s leadership. But until now, there was no official word from the BJP’s leadership.

Mr Shah’s comment has come as a big relief for all those working behind the scenes to ensure the alliance remains intact, especially after relentless attacks on Nitish Kumar by Union Minister Giriraj Singh, who criticised the Chief Minister almost every day after heavy rain led to unprecedented flooding in state capital Patna earlier this month.

When no BJP leader or MLA showed up for a Dussehra event in Patna’s Gandhi Maidan attended by Nitish Kumar, it was read as a sign of a widening rift between the allies.

Bihar BJP chief Sanjay Jaisawal has said Giriraj Singh’s comments cannot be seen as the party’s official line. “He (Mr Singh) speaks in his personal capacity. Only a statement by the party’s spokesperson should be treated as official,” Mr Jaisawal said.

The Bihar assembly election is due next year.