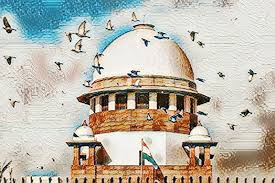 New Delhi: If there has to be a perfect example of how the wheels of justice turn slowly but grind exceedingly fine, this is it. Almost four decades on, a man has been spared life behind bars since he was six months short of 18 at the time of committing a murder.

Incarcerated for a period of more than 10 years since 1980, Banaras Singh has finally earned his freedom with the Supreme Court concluding that he was 17 years and 6 months old when he committed the murder.

A bench headed by Justice NV Ramana held that Singh is entitled to the benefit of the juvenile justice law, and since he has already served a long time in jail, he should be released immediately instead of being sent back to a juvenile court again.

The incident occurred in August 1980 when Singh had checked in a hotel room with his cousin in Bihar’s Gaya. Later, the hotel staff found the cousin’s dead body inside the room while Singh had left. Singh was arrested immediately. In 1988, a trial court in Gaya convicted him of the murder charge and sentenced him to life imprisonment.

In 1998, the Patna High Court dismissed Singh’s appeal and affirmed his conviction as well as life term.

Singh filed an appeal in the Supreme Court in 2009, and claimed that he was juvenile at the time of commission of the crime. His petition sought benefit of the Bihar Child Act, which was subsequently amended as per the Juvenile Justice Act. The matter remained pending for a decade in the top court, which in December last year sought a report from the jurisdictional trial court.

Based on Singh’s matriculation certificate and other records, the trial judge sent a report to the Supreme Court, confirming that Singh was indeed a minor and six months short of 18 when the offence took place. “Taking into consideration the said fact and the law prevailing as on today, we are of the considered view that the appellant is entitled to the benefit of juvenility,” thus held the apex court.

The bench took into account that Singh has already undergone more than 10 years of sentence. “In view of that, there is no need to again sending the matter for determination under the provisions of the Juvenile Justice (Care and Protection of Children) Act, 2000 by the Juvenile Justice Board. We dispose of the appeal accordingly and direct that the appellant be released forthwith, if he is not required in any other case,” it ordered.