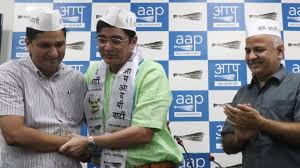 Former Jharkhand Congress chief Ajoy Kumar is set to quit the grand old party and join the Aam Aadmi Party (AAP) on Thursday, about three weeks after he was removed from the post.

Kumar was on August 26 replaced by former union minister and tribal leader Rameshwar Oraon the new Congress chief in poll-bound Jharkhand.Oraon, a 1972 batch retired Indian Police Service (IPS) officer, was 14 years senior in service to Kumar who resigned from the post on a bitter note.

He had accused them of placing “personal interests” above the party and “indulging in corrupt” practices. A former Lok Sabha MP from Jamsedhpur, Kumar was appointed the Jharkhand Congress chief in November 2017.

The Congress in Jharkhand is a divided house with factionalism taking a heavy toll on the party in the recent national elections, winning just one of the total 14 Lok Sabha seats from the state. Its alliance partner Jharkhand Mukti Morcha (JMM) also managed to bag just one seat.

Though the Congress is likely to continue its alliance with the JMM for the assembly polls too, the ruling Bharatiya Janata Party (BJP) is on a strong wicket following its stupendous performance in the Lok Sabha elections, winning 11 seats. Its ally AJSU Party secured one seat.

Kumar will be tasked with the responsibility of expanding the AAP base in the tribal-dominated state.