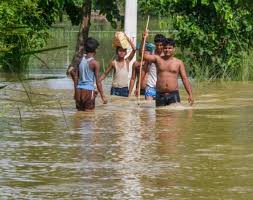 Axe has fallen on the senior officials after the government had cracked whip on several middle level officials of the Patna Municipal Corporation and BUIDCO, responsible for upholding civic facilities in the capital city.

They were punished for lapses in discharge of their duties in dealing with the accumulation of water in several localities after heavy downpours for three days starting September 27 in Patna.

Water-logging continued for over a week in promiment localities like Rajendranagar, Kankarbagh and Patliputra colony, when boats of NDRF and SDRF were seen rescuing citizens from their inundated houses, had drawn national outrage.

The visual of Deputy Chief Minister Sushil Kumar Modi being rescued from his flooded house in Rajendranagar with other family members was seen with awe across the country. The issue had also resulted in some hot exchange of words between the ruling NDA partners- JD(U) and the BJP.

Chaitanya Prasad has been shifted to Science and Technology department as its principal secretary. Prasad, a 1989 batch IAS officer, will continue to hold additional charge of the Parliamentary Affairs department, the notification said.

Patna divisional commissioner Anand Kishor has been made Secretary in the urban development department. He will also hold additional charge of Managing Director of the Patna Metro

According to the notification, 2002 batch IAS officer Sanjay Agarwal, currently Transport Secretary, has been given additional charge of Patna divisional commissioner till further order.

He had earlier served as Patna District Magistrate. BUIDCO MD Amarendra Prasad Singh has been transferred and made Administrator, Bihar State Road Transport Corporation, Patna while Chandrashekhar Singh, presently working as Additional Secretary in the CM Secretariat, will replace him in BUIDCO.

Choked drainage system after heavy rain in September end had caused massive water logging in many areas of the state capital.

The government had on Monday placed officials under suspension, withheld payment of their salaries and issued show-cause notices for lapses in discharge of their duties when the state capital was reeling under worst-ever water logging in three decades.

Chief Secretary Deepak Kumar had said the action followed a review meeting of the top government officials. The new transfer order also saw change in position of some other IAS officers.

Dr Dipak Prasad, currently Advisor, Bihar State Planning Board, has been made principal secretary in the Cabinet Secretariat department.

Pradeep Kumar Jha has been made Director, Information and Public Relations department till further order. Jha will continue to hold additional charge as Special Secretary of Public Health and Engineering Department (PHED), it added.