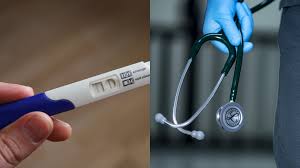 Ranchi: It seems the government doctors in Jharkhand are leaving no stone unturned to bemuse their patients. In a bizarre development, a doctor in Chatra district of Jharkhand prescribed pregnancy-tests for two men when they complained of stomach-ache.

However, the doctor in question has denied having prescribed such a test and claimed he was being framed in the case. Earlier, a doctor had advised a woman patient to use condoms when she complained of regular stomach-ache.

According to a report, the Civil Surgeon has ordered an inquiry into the matter. The matter came to light after two patients-26-year-old Kameshwar Ganjhu and 22-year-old Gopal Ganjhu-were told by a pathology lab that they have been prescribed pregnancy tests by the doctor identified as Mukesh Kumar.

However, after the disclosure by the lab, the two patients did not get any tests done and returned to their village. At their village, they informed people about what happened to them at the hospital.

The report suggests that the doctor Mukesh Kumar prescribed ANC test to the two men. The test is basically prescribed for women to check pregnancy.

As the matter became public and was highlighted in the media, the district civil surgeon ordered a probe to get into the details of the matter.

“I have ordered a probe after the matter was brought to my notice on Saturday. And I have ordered the doctor in-charge to probe the incident. This whole incident could be a conspiracy by quacks against the doctors at this hospital,” the report quoted Civil Surgeon Arun Kumar Paswan as saying.

Meanwhile, the concerned doctor has alleged foul play claiming the hospital register maintains the names of the wives of the two men. The doctor said it is an attempt to malign his image.

In August this year, a government doctor in Jharkhand allegedly prescribed a woman condom when she told him about her stomach pain.

The incident was reported from Ghatshila sub-division hospital in East Singhbhum district of the state. The accused doctor has been identified as Asraf Badar, who is working on a contractual basis with the hospital.