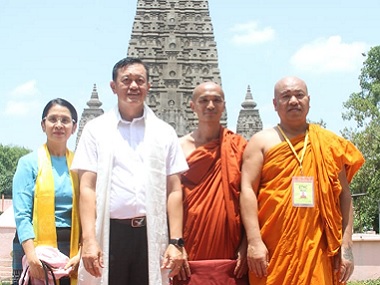 In 1940, Mohandas Karamchand Gandhi made no pretensions of his masterful understanding of the dynamics between religion and politics when he said in his autobiographical account: “Those who say religion has nothing to do with politics do not know what religion is”.

And India has done well to dish out the Buddhist religious fare when it comes to visiting dignitaries from Buddhist countries. Bodh Gaya is now a near permanent fixture. The top pilgrimage site is in Bihar is where the Buddha gained enlightenment (nirvana) sitting beneath a banyan tree.

Definitely much more than religion was at play when the air force chief of Myanmar visited Bodh Gaya on Thursday. Located nearby is an Officers’ Training Academy (OTA) where many Myanmarese military officers are being trained.

The five-member Myanmarese military delegation was led by Commander-in-Chief (Air) General Maung Maung Kyaw, who is a favourite of the military chief Senior General Min Aung Hlaing and is expected to assume more important roles in future. The wives had also accompanied their husbands on the visit to the religious site.

On Wednesday, Maung had met with Indian Army chief General Bipin Rawat and Indian Air Force chief BS Dhanoa, in what has been just the latest of a whole array of parleys between top officials of the two countries in the last couple of years.

Sharing a 1,640-kilometre-long border, India and Myanmar have an interesting relationship. Till a few years ago, Myanmar was reluctant to act on various Indian insurgent organisations that operated out of jungle camps based in Myanmar territory. These areas were looked as safe sanctuaries for the Indian insurgents.

Myanmar’s reluctance was understandable. It did not have the administrative and military reach to operate is such far off and inhospitable areas. Military equipment too was scarce.

Moreover, it was already battling several ethnic insurgencies including the Shans, Kachins and the Arakan rebels. It simply did not want to open another front.

In the course of last few years, things have changed. The weapons and logistics part was taken care of. India supplied transporting hardware including trucks as well as weapons including hundreds of 105 mm guns taken from old Indian army battle tanks, Carl Gustaf rocket launchers and other weapons. A steady supply of information followed.

More frequent meetings of top leadership, security and military officials led to closer coordination. Both militaries are now undertaking a major assault that may prove decisive.

Myanmar is also a space in which India and China are trying to spread their influence. Besides strategic plans of expanding and spreading influence, economics is also the name of the game. China sees in Myanmar a route to the Indian Ocean to bring in its oil supplies through pipelines. For India, pursuing its Act East policy in all sincerity, access through Myanmar to link up with the vibrant dynamics of South East Asia is a must.

This is not the first time that the Bodh Gaya circuit is being put to good use by the Indian military establishment. From 23 to 25 December, 2018, 60 couples from the Myanmar Army were invited to Bodh Gaya.

The Bodh Gaya idea first took shape during Rawat’s four-day visit to Sri Lanka in May 2018 when the proposal to invite Sri Lankan military personnel and their families to the OTA at Gaya was mulled.

A month later on 24 June, 2018, an IAF C-17 aircraft brought 160 Sri Lankan military personnel and their families to Bodh Gaya. The other site visited was of course the OTA. The same aircraft also flew them back to Colombo.

With religion definitely providing the fillip to the politics of the day, the Buddha must really have smiled at Bodh Gaya on Thursday.