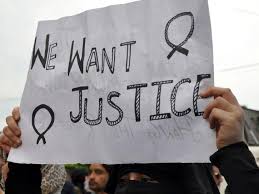 On Sunday, July 29th a woman set herself on fire outside the Vaishali Nagar police station in Jaipur after the cops allegedly failed to act on a rape complaint she had filed over a month ago.

The woman, who is married and had a son had alleged that a relative had raped her and blackmailed for years while her husband, an army man was away for duty.

On Sunday, she reportedly went to the Police Station to meet the SHO and after it failed she took out petrol from her two-wheeler and set herself on fire. The woman who was seriously injured was rushed to a hospital where she died a day later.

Her husband had alleged that the cops did not act on the complaint as they had taken a huge amount from the accused to hush up the case.

Last week, Congress leader Priyanka Gandhi Vadra had tweeted a video which was shot inside a police station in Kanpur.

In the video, the cops are seen harassing a 16-year-old girl after she went to the police station to file a complaint of molestation.

The cops instead of filing the FIR went on a victim-shaming spree and the head constable was even seen “interrogating” the teen.

He goes on to question why she was wearing jewellery like a ring and a necklace.

You don’t study. So much jewellery, why are you wearing it? What’s the use of these? This just shows what you really are,” the cop is heard saying in the video.

He then went on to give a lecture to the parents about the girl’s character.

A 17-year-old girl from Unnao, UP had filed a rape case against the local MLA Kuldeep Sengar in June 2017. But for nearly ten months nothing happened and in April 2018 the girl attempted to set herself on fire outside the residence of CM Yogi Adityanath to demand justice.

These are three recent cases that have been once again highlighted the plight a rape or molestation victim has to go through to get justice.

These are not isolated cases, over the years there have been innumerable cases from across India where the rape survivor had to take the extreme step because the police failed to act on her complaint.

Due to the stigma attached to being identified as a rape victim, the majority of rape incidents do not get reported and the victims will live a life of silent suffering. It takes a certain amount of courage and trust in the system for a rape survivor to come out and file a complaint. But once those who are supposed to give justice to her fails to do so, it is not just them failing, it is the system that failed the rape victim. She will then be forced to take desperate steps like a hunger strike, public protest or even suicide.