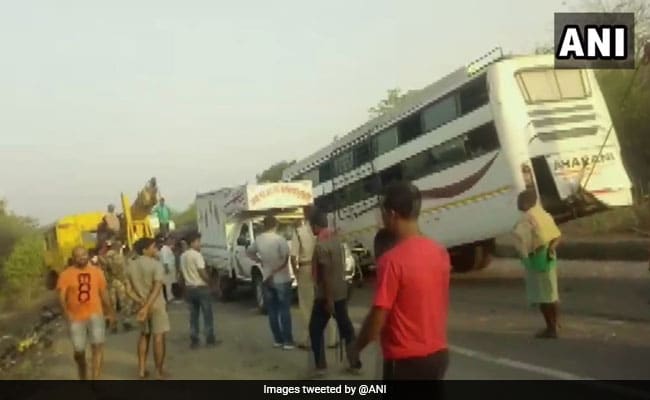 New Delhi:  11 people were killed and 25 others injured after a speeding double-decker bus rammed into a truck following a brake failure at National Highway 2 near Hazaribagh in Jharkhand.

The accident took place near Danua-Bhanua area on National Highway 2 when the bus hit the rear of the trailer truck.

“The bus was running at a speed of 120 km/h when we got to know that the breaks are not working. The bus driver tried to control the speeding bus but it rammed into a truck coming from the opposite side. The lower deck of the bus got completely damaged and the passengers were pulled out from the bus after the accident,” an injured passenger Saurabh Kumar told ANI.

Pictures of the accident released by news agency ANI show the vehicle overturned and a crowd gathered at the site where the incident took place.

“I heard the bus driver shouting that the breaks are not working and we should save ourselves, both the conductor and bus driver tried to save the passengers but they couldn’t because there was no way to stop the speeding bus,” another injured passenger told ANI.

Few of the injured passengers are said to be in a critical condition and they have been shifted to Ranchi for further treatment.

Senior police officer Manish Kumar said, “We have visited the accident spot with the National Highways Authority of India (NHAI) team earlier as well, and that spot has been declared as a ”Black Spot” because at least 150 people have died in a road accident in the last six months on the same spot. We will be visiting the accident spot again with NHAI team for further research after this incident.”