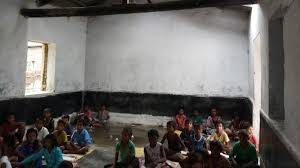 The Rajkiya Utkramit Madhya Vidyalaya in Bihar’s Basanta village, 40 kilometre from Patna, teaches students from classes 1 to 8. Almost 250 children study here, however, due to lack of resources, the school runs from just two classrooms, forcing many to study in the open space outside.

“There is a lack of resources because of which children are studying outside the classroom. We have taken up the matter several times with the district officials but to no avail,” said Sanjeev Kumar Sah, a class teacher at the school.

India Today TV travelled to this government school in Vaishali district and found that there were no tables and chairs available for students from classes 1 to 4. Lack of resources compelled the children of these classes to get their own sitting arrangement to school.

“We don’t have a chair and table to sit and that is why we bring empty gunny bags to school to study”, said student of Class 2.

There is a separate room just outside the school premises which is being used by students of class 3 and 4 to study. Urvashi Kumari, teacher of these students, complained that the roof of the room is broken from many places because of which water fills up the classroom during the monsoons.

When India Today TV went into this classroom, it was found that the children were sitting on the floor with water and studying.

“The roof of this class is broken and we have raised this matter many times but nothing has been done. We have no option but to teach students in this situation,” said Urvashi Kumari.