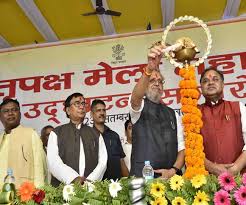 The “Pitripaksh Mahasangam”, a Hindu ritual which draws people from far and wide to this central Bihar town for a fortnight every year, went underway on Thursday.

During the fortnight, Hindus pray for the salvation of departed souls.

The annual congregation was inaugurated here by Deputy Chief Minister Sushil Kumar Modi in presence of his cabinet colleagues and parliamentarians and legislators.

The deputy CM along with a host of dignitaries offered prayers on the occasion at the Vishnupad temple along the Falgu river, which is likely to remain abuzz with activity till the conclusion of the congregation on September 28.

District Magistrate, Gaya, Abhishek Kumar Singh, said arrangements have been made to accommodate up to eight lakh devotees during the congregation who would be provided with facilities like health camps, buses and e-rickshaw for commute and safe and hygienic drinking water.

“Vedis (altars) have been cleaned up and given a fresh coat of paint. Security has also been given due importance with installation of adequate number of CCTV cameras across the town and deputation of 550 magistrates who would be guiding the police personnel,” Singh said.

Senior Superintendent of Police (SSP) Rajiv Mishra said priests have been provided with identity cards to prevent swindlers from making hay on the occasion.

“Pandas (priests who conduct Pind Daan) have been provided with I-cards so that anti-social elements do not come in disguise to swindle visitors and people go back with good memories of Bihar, as desired by Chief Minister Nitish Kumar during a recent meeting,” the SSP added.