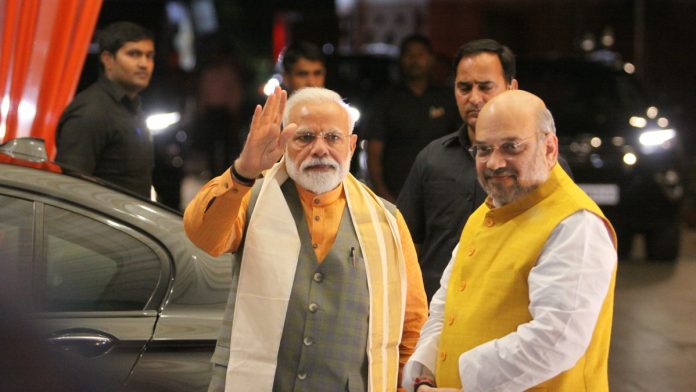 BJP tally increased from three to eight seats in Delhi assembly. This is enough to tell the party that polarisation could be a good bet in Bihar, Bengal and Assam.

Shaheen Bagh’ was the most mentioned reference in the Bharatiya Janata Party’s Delhi poll campaign, a convenient metaphor for it to polarise the election and the electorate. But Tuesday’s verdict has shown us one thing — the politics of polarisation may not always work for Narendra Modi and Amit Shah. At best, it is a no-gain-no-loss gamble for the party, one that the BJP will continue to push in the upcoming assembly polls, where the party has huge stakes.

But make no mistake. The one important lesson the BJP will not learn from the Delhi election is to refrain from brazen, even toxic, polarisation.

Polarising the voters on communal lines lies in the BJP’s political DNA, and has been at the heart of its rise in national politics. Notwithstanding Delhi results, this strategy will continue to form the core of the BJP’s campaign in elections in Bihar — due later this year — and Assam and West Bengal next year.

When the poll season began, BJP members privately admitted the party was staring at a dismal performance, with Chief Minister Arvind Kejriwal’s Aam Aadmi Party as the front-runner by a wide margin.

Even senior BJP leaders, including the likes of junior finance minister Anurag Thakur and Uttar Pradesh CM Yogi Adityanath tried their best to polarise the election, limiting the party’s campaign to goli and gaali.

The BJP has increased its tally from three to eight seats and its voteshare from 32.7 per cent to 38.7 per cent (as per the Election Commission’s figures till 4pm). This is a marginal improvement for the party, but a resounding defeat nonetheless. However, given that the BJP knew it had a poor chance in Delhi, the polarisation push was more of a desperate attempt to deflect attention from Kejriwal’s governance conversation. Modi and Amit Shah will not see the Delhi election result as a failure of their strategy. It may not have helped BJP, but hasn’t taken away much either. In fact, if Lok Sabha polls were to be held today, Modi will manage to sweep Delhi again.

Do voters get put off by these overt attempts at polarisation? Unlikely, considering BJP polarises every election and its political grammar is such. If the Indian voter had a problem with polarisation, the BJP wouldn’t have managed 303 Lok Sabha seats after its ‘infiltrators are termites’, ‘go to Pakistan’ and ‘anti-national’ campaigns in 2019.

The politics of polarisation may have its limits, but for BJP, the law of diminishing marginal utility does not quite apply.

Bihar, West Bengal and Assam — three states where the BJP will do all it can to win — are fertile grounds for polarisation. In Bihar, where the party is in power with Nitish Kumar’s Janata Dal (United), the Muslim population is around 17 per cent as per the 2011 Census. For Modi-Shah’s brand of politics, it makes complete sense to talk communal and put the Congress-RJD combine on the backfoot for ‘minority appeasement’. It helps the opposition’s cause that the RJD has remained a firmly secular party, never being seen as having compromised on that front.

In West Bengal, Chief Minister Mamata Banerjee has already been branded as a minority appeaser, and her anti-NRC and anti-CAA stance have only given the BJP more ammunition against her.

If there’s one state that provides Narendra Modi and Amit Shah the most agreeable ground to polarise on communal lines, it is Assam. The state has been on the edge after the National Register of Citizens (NRC) was updated and the CAA brought in, given the big ethnicity faultline. The BJP has conveniently turned the ethnicity debate into a religious one, changing the language of the state’s conflict. As elections approach, the party will sharpen this polarisation pitch further.

For the BJP — whether under Atal Bihari Vajpayee, L K Advani, Narendra Modi or Amit Shah — polarisation, an overtly communal agenda and language is the brand of politics it relentlessly pursues, one that has helped it reap dividends over the decades. Shaheen Bagh may be behind it now, but expect the BJP to find another metaphor for its divisive agenda in the upcoming elections.