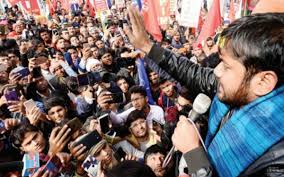 They could be defining faces of the decade, Forbes India has said. These 2 Bihari men have however been part of political parties with a limited support base

They could be the defining faces of the decade, said Forbes India while releasing a list of 20 Indians to watch out for in 2020. The two Bihari men have however been part of political parties with limited support base and credited with not too bright a future.

Neither JD(U), which expelled Kishor after he baited JD(U) president Nitish Kumar for not opposing the Citizenship Amendment Act (CAA) nor the Communist Party of India, boasts of a large base in Bihar.

But at a time when communism is facing an existential challenge in India and abroad, Kanhaiya Kumar has been drawing huge crowds in his public meetings. He connects with people even better than Lalu Prasad Yadav. He speaks well, explains complex legal, economic or political issues simply and is an aggressive critic of the BJP and Narendra Modi.

While Kishor is a Brahmin, Kanhaiya happens to be a Bhumihar. But there the similarities end. Kumar hails from a poor family while Kishor’s father was a doctor. Unlike Kumar, Kishor is the quintessential backroom boy, a political and communication strategist. His public speaking skills remain untested while Kumar has already the makings of a mass leader.

Kishor in his early forties is already a veteran of many elections. After leaving his job with a UN body, he returned to help BJP win the Gujarat assembly election in 2011. He thereafter set up Narendra Modi’s Prime Ministerial campaign and is credited to have masterminded it. But after 2014 he parted ways with the BJP and signed up with Nitish Kumar to manage the campaign of the Maha Gathbandhan or Grand Alliance (RJD-JD(U) and Congress) in the Bihar election in 2015.

Since then Kishor has been either consulted or engaged by Mamata Banerjee, M.K. Stalin, Arvind Kejriwal, Captain Amrinder Singh and even Chandra Babu Naidu. No wonder he has kept people guessing about his next assignment.

While Kanhaiya Kumar has a PhD in African Studies from JNU, Prashant Kishor worked in the health sector in Africa for the United Nations.

While Marxism may have lost its appeal among the poor and the working classes, election of leftist governments in Nepal and Mexico in two corners of the world also speak of the continuing relevance of leftist ideas.

Both of them seem to be on the same page as the Congress on several issues. And while Kishor has publicly praised Congress leaders for opposing the CAA, Kanhaiya Kumar is accompanied by Congress MLA and a former JNUSU president himself Shakeel Ahmed, on his month-long ‘Jana Gana Mana Yatra’, which will conclude at Patna on February 29.

Whatever political direction their political journey eventually takes, the duo are sure to play key roles in the Assembly election later this year.