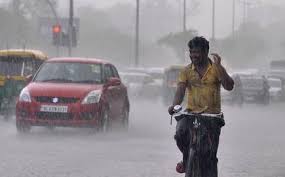 The deep depression over South Jharkhand had weakened into a depression on Thursday morning, but it shall hardly make a dent on its rain generating capacity.

The depression centred over north-east of Chhattisgarh this morning, about 90 km east-southeast of Ambikapur (Chhattisgarh) and about 140 km west-southwest of Ranchi (Jharkhand).

India Met Department (IMD) has warned of strong winds with speed up to 40 km/her and gusting to 50 km/hr over interior areas of Odisha, Chhattisgarh and Jharkhand until Thursday night.

The depression may continue to move deeper into Central India and weaken gradually, but the IMD has given out a heavy to very heavy rain warning across a wide swathe of geography.

A similar outlook is valid over Madhya Pradesh for the next two days; over Madhya Maharashtra, Konkan, Goa, Kerala and Karnataka for next three days; and over Gujarat on Friday and Saturday.

Isolated extremely heavy falls are likely over the ghat areas of Madhya Maharashtra, Konkan, Goa, Kerala, and coastal and southern interiors of Karnataka during next two days.

The same forecast is for South Madhya Pradesh and East Rajasthan for today and over Gujarat for tomorrow.

Kerala has declared a holiday today for all schools and colleges across seven of its 14 districts given the threat of continuing heavy rain, especially in the northern districts.

A red alert has been declared over the dam-bound Idukki, Kozhikode and Malappuram districts. Storage levels in reservoirs owned by the State Electricity Board was at 27 per cent as of Wednesday.

In detailed forecasts, the IMD said that light to moderate rainfall is likely at most places over Odisha and Chhattisgarh with heavy to very heavy rainfall at a few places and isolated extremely heavy falls till tonight.

Light to moderate rainfall is likely at most places over North Andhra Pradesh, Telangana and Vidarbha until tomorrow with heavy to very heavy falls at a few places.

The subsequent onward movement of the depression will bring moderate rainfall over West Madhya Pradesh and East Rajasthan today with heavy to very heavy falls and isolated extremely heavy falls (above 20 cm).