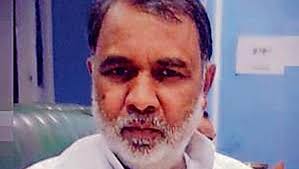 “When Lord Ram could be a Kshatriya, Krishna a Yadav then how not Lord Shiva and Hanuman could be a Bind,” the Bihar minister for mining, Braj Kishor Bind said while speaking to media during a visit to his home district Kaimur on Wednesday. Traditionally, members of Bind caste are known for their expertise in digging mud and fishing.

The minster went on to add, “I am a proud descendant of Lord Hanuman and Shiva and my Bind community. It is not the first time I have announced this fact. I revealed this secret on Tuesday in  presence of Bihar Governor, deputy CM and a couple of ministers, besides an august gathering of around 1500 people during felicitation function at Bapu Sabhagar. I can reiterate the same again and again with pride.”

“According to the Hanuman Chalisa, a text written by famous medieval saint Tulsi Das, Hanuman was the son of Lord Shiva,” the minister claimed referring to the stanza- Shankar Suwan Keshari nandan (son of Shiva and Keshari).

Uttar Pradesh chief minister Yogi Aditya Nath during last parliamentary elections had created a similar row by saying that Lord Hanuman was a Dalit and a forest dweller.

The election commission had imposed a ban on his electioneering for three days.

“Now, Hindus and worshippers of Lord Shiva and Hanuman are highly confused on whether to believe Yogi Adityanath, the head of Nath Sampraday and Mahant of Guru Gorakshnath Peeth or the Bihar minister of his own party. It’s time the BJP top leadership takes a call on deciding who is right and who is wrong,” said Pt Bagishwari Prasad Dwivedi, a professor of Sanskrit and an authority on ancient texts.

“I have not seen such reference in Shiv Purana but will again read the book in light of the minister’s claim,” professor Dwivedi said.