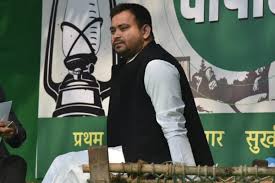 Patna: Fissures within the opposition RJD in Bihar came to the fore on Sunday when one of its founding members sought to join issue with the heir apparent Tejashwi Yadav over his proclamation of “no entry” for Chief Minister Nitish Kumar into the multi-party Grand Alliance.

Former Union minister Raghuvansh Prasad Singh, one of the national vice-presidents of the RJD, spoke disapprovingly of the remark made by Yadav jailed founding president Lalu Prasad’s younger son at a meeting of the party’s minority cell here last week.

“It does not sound like a political comment. And where does the question of no entry arise when we have not yet received a request for entry, in the first place,” Singh told reporters, when asked about the stance adopted by Yadav, who has been declared the party’s chief ministerial candidate for next assembly polls.

He also remarked wryly that “people tend to initially disagree with every idea that I propose. They tend to concur six months afterwards.

Notably, Singh has been advocating Kumar’s return to the Grand Alliance – which the latter walked out of in 2017 since the Lok Sabha elections earlier this year in which the five-party formation managed to win just one out of a total number of 40 seats in the state.

The RJD, which was floated by Lalu Prasad in 1997, contested 19 seats but drew a blank in the Lok Sabha elections its worst-ever performance since inception.

The poll debacle led to question marks being raised over the leadership of Tejashwi Yadav, who spearheaded the campaign for the Grand Alliance which comprises, besides the RJD, the Congress, former Union minister Upendra Kushwaha’s RLSP, former Chief Minister Jitan Ram Manjhi’s HAM and Bollywood set designer-turned-politician Mukesh Sahni’s VIP.

Allies like Manjhi have revolted, threatening to go it alone in the assembly elections due next year. Tejashwi Yadav, 29, went into a sulk after the Lok Sabha polls, refusing to attend party meetings and assembly session despite being the leader of the Opposition. He has shown signs of recovery from the shock with renewed interest

in political activities for the past few weeks.

He had made his political debut in the 2015 assembly polls which was followed by his appointment as Deputy Chief Minister at a tender age. His name, however, cropped up in a money laundering case relating to alleged irregular land deal under his father’s watch, when he was the Railway Minister from 2004 to 2009.

Nitish Kumar resigned as chief minister after the RJD refused to heed demands that the young leader step down. He formed a new government with the BJP, which promptly came up with an offer of support.

Kumar had made a made a veiled attack on Tejashwi Yadav a day after the latter made the “no entry” remark. “Some of their leaders come up with an idea. Somebody

else rises up and says no, it is not needed. Little do they realise that nobody is giving them any importance,” Kumar had said at the JD(U)’s state council meeting, without mentioning Yadav or his party by name.

He had also asserted that the NDA in Bihar, which also includes BJP and Ram Vilas Paswan’s LJP, will win “more than 200” seats in the 243-strong state assembly.