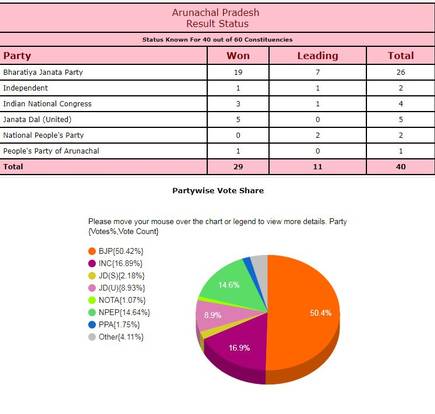 Despite the NaMo wave in the country and the State, where the BJP repeated its 2014 feat of victory on 12 out of 14 Lok Sabh seats in 2019 General Elections, several regional and smaller political parties are enthusiastically eyeing to make their political ground in Jharkhand. So much so that a number of parties have already announced the number of seats, on which they will field their candidates.

While the Nitish Kumar led Janta Dal United has decided to go alone in State Assembly polls, terming its alliance with the National Democratic Alliance just for Lok Sabha polls, it has also made announcement of tentative candidates for about 14 seats in the State.

The party that had two legislators in the third Assembly of the State, is eyeing its traditional voters alongwith the Kurmi voters, who play a significant role in Jharkhand politics.

The AAP Jharkhand unit has also got a shot in the arm after former Jharkhand cadre IPS officer and ex State in-charge of Congress Dr Ajoy Kumar joined the party recently. The party is also ready to contest elections on more than 40 seats and organising workers conferences across various Assembly segments.

“Our assessment of applications on 40-42 seats across the State is going on. It’s a process through which we finalise whether to contest elections on a particular seat or not. It mainly depends on the number of active workers in the area and also the background of applicants is checked before a name is finalised.

We have been organising workers conferences in Ranchi, Dhanbad, Jamshedpur and other prominent places of the State to boost the morale of workers,” said Rajesh Kumar, Spokesperson AAP, Jharkhand.Similarly, The Nationalist Congress Party, State unit has announced to contest elections on 30 seats in Jharkhand. Former Minister and State president of NCP Kamlesh Kumar Singh said that they were in constant touch with other opposition parties to get into an alliance.

If there is an alliance, the NCM will contest on 10 seats. However, if the NCP is not in any alliance it will contest polls on 30 seats, he added.

The All India Majlis Ittehadul Muslimeen (AIMIM), which has won two Assembly seats in Maharashtra and one seat in Bihar in the recent elections, is also gearing up to field its candidates in the coming elections. AIMIM chief Asaduddin Owaisi, who had recently organised a rally in the Capital city has been getting scores of letters and calls for candidature in the polls.

The AIMIM has recently announced that it will contest the State elections on 50 seats if there is no alliance with likeminded parties. The party has claimed that it will win at least 12 seats this time.