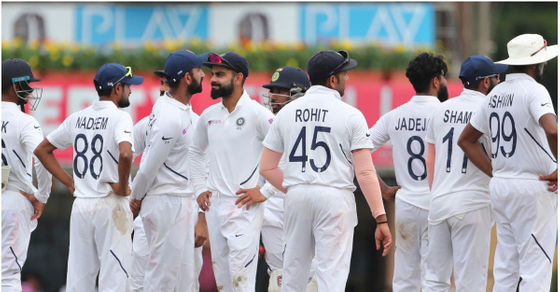 Virat Kohli on Monday went past Mohammad Azharuddin as the Indian captain who has enforced the follow-on most times in Test cricket after the hosts asked the South Africans to bat again on Day 3 of the Ranchi Test.

Kohli enforced the follow-on for the 8th time as captain of India, Azharuddin had done it 7 times while MS Dhoni and Sourav Ganguly enforced it 5 and 4 times, respectively.

India, who had declared on 497 for 9 on Sunday, took a first-innings lead of 335 after bowling South Africa out for 162 by the second session on day 3. This is the second biggest first innings lead for India against South Africa after the 347-run lead they took in the Kolkata Test in 2009-10.

Umesh Yadav was the pick of the Indian bowlers as he finished with 3 for 40 while Ravindra Jadeja, Mohammed Shami and debutant Shahbaz Nadeem bagged a couple of wickets each.

The struggle for the Proteas continued on Monday with captain Faf du Plessis getting out in the first over of the day, thanks to an unplayable delivery from Umesh.

The wickets kept on tumbling from there on as the visitors lost 4 in the first session to reach lunch at 129 for 6.

Zubayr Hamza (62), Temba Bavuma (32) and George Linde (37) offered some resistance but it was still not enough as the Indian bowlers hunted in packs and kept putting pressure on the batsmen in overcast conditions.

Earlier on Sunday, India had declared their innings on 497/9 and had picked the wickets of both the South African openers before play was stopped because of bad light.