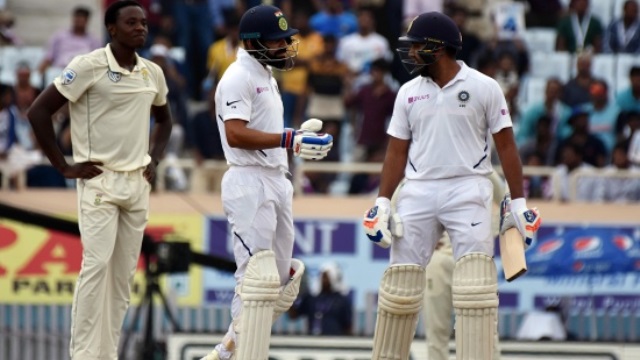 India skipper Virat Kohli’s struggle to get the Decision Review System (DRS) right continued as he became prey to a wrong call for the ninth successive time as batsman in the first innings of the third Test against South Africa on Saturday.

Kohli was trapped in front by Anrich Nortje for 12 and it looked plumb, but the ace batsman reviewed it to no avail.

With the duo of Rohit and Rahane steadying the ship for India, batting coach Vikram Rathour praised both the batsmen. Rathour said that Rohit showed grit and determination to play away the first session when the likes of Kagiso Rabada had the ball moving viciously.

“As I said, they were bowling in good areas and there was some help in the wicket. So, as a batsman, you have to survive during that time, which Rohit did very well,” he said.

“He is too good a player to not play all formats. Opening the batting with him was the right decision. And the number of runs he has scored, he has settled the issue (of opening) for the time being.

“If somebody of his stature starts coming good at the top of the order, that changes everything for the team, even when you are touring. He is such an experienced player; I don’t think you need to tinker with his technique. He just had to make some mental adjustments vis-a-vis his gameplan.”

Commenting on Rahane’s knock, the former India opener said that the Test deputy showed great intent and looked good in the middle during his unbeaten knock of 83.

“Ajinkya showed great intent today. Whenever he bats with this intent, he looks a really good player,” Rathour said.