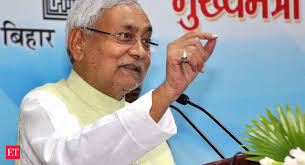 The Bharatiya Janata Party (BJP) has decimated the opposition in the 2019 Lok Sabha polls, but intriguing developments of the past few days suggest space opening up for a possible churn in Bihar politics in the run up to the state Assembly polls by October 2020.

On Tuesday, union minister and BJP leader Giriraj Singh ridiculed Bihar Chief Minister Nitish Kumar and others over their attending ‘iftaar’ parties. In turn, Kumar was dismissive of Giriraj Singh’s comments and said his government would deliver on all its promises much before the Assembly polls.

By evening, BJP sources said party chief Amit Shah had phoned Giriraj Singh and advised him to be careful about his comments, particularly on BJP’s allies.

In his tweet, Giriraj Singh had commented at a photograph of Kumar and other leaders breaking fast at an ‘iftar’. “How beautiful would the picture have emerged, had phalaahaar (a fruit feast) been organised during Navaratra with the same fervour with splendid photographs taken. Why do we lag behind in observance of our own karm-dharm (religious customs) in public, while staying ahead in making a show for those of others,” Singh tweeted in Hindi.

The latest developments come in the wake of Kumar spurning the offer of a cabinet berth in the Narendra Modi-led council of ministers at the Centre, stating that his party does not “symbolic” but “proportional representation”. He, however, denied any “unease” between the allies.

Kumar then expanded his cabinet, including eight ministers, all from the Janata Dal (United) that he leads. He offered the BJP one ministerial berth, which it refused.

“It would be even better if all small parties merge together and become a single entity to take on the humongous challenge posed by the BJP,” Raghuvansh Prasad Singh said. He said these were his personal views but RJD chief Lalu Prasad, currently incarcerated, and he have worked together for a long time and thought alike “on most occasions”.

In the just concluded Lok Sabha polls, the RJD could not win a single seat in Bihar. Its ally Congress could win one seat. However, Kumar’s JD(U) won 16, and allies BJP and Lok Janshakti Parthy won 17 and six seats respectively.

Historically, the JD (U), and its previous avatar of Samata Party, has performed poorly whenever it has fought any election without a strong alliance partner.

The Samata Party, with George Fernandes and Kumar as its top leaders, could win only seven of undivided Bihar’s 324 assembly seats. In the 2014 Lok Sabha polls, the JD (U) could win only two seats. The JD (U) has improved its vote share significantly.

Observers of Bihar politics say Kumar is aware that the BJP might now want the chief ministerial chair for itself after the next Assembly polls. In Maharashtra in 2014, the BJP had severed ties with the Shiv Sena to emerge the single largest party in the Assembly.

However, no other party currently has a leader of the stature of Kumar in Bihar, including the BJP. BJP’s Giriraj Singh is now a cabinet minister in the Modi government, while Bihar BJP state unit chief Nityanand Rai, being groomed as a possible chief minister, is minister of state for home at the Centre but still lacks Kumar’s popularity.

Raghuvansh Prasad Singh’s comments suggest that the parties that came out of the womb of the socialist parties, or the ‘Janata parivar’, could be prepared to come together under Kumar’s leadership. “Now that the results have dented Tejaswi Yadav’s leadership, the challenge from within the family of Lalu Prasad to Kumar has weakened,” a Bihar leader said.

Giriraj Singh, who defeated CPI’s Kanhaiya Kumar from Begusarai, has been a known detractor of Kumar’s. “We have never taken utterances of Giriraj seriously. We have always believed in giving respect to all religions and hence we sport a ’tilak’ and also wear skullcaps.” JD(U) spokesman Sanjay Singh said.

The ’tilak’ and skullcap metaphor is reminiscent of the developments of April, 2013, when at his party’s national executive meet in New Delhi Kumar had used the analogy to highlight ideological differences with the BJP, which eventually led to him severing 17-year-old ties between the two parties.

Union minister and LJP chief Ram Vilas Paswan said the BJP-JD(U) and his party’s alliance is “intact”. Former chief ministers Rabri Devi and Jitan Ram Manjhi also appeared to have mellowed towards Kumar. Kumar attended the iftar that Manjhi hosted. Rabri Devi said any decision on inclusion of new allies can be taken only in consultation with all allies.

Union minister and LJP chief Ram Vilas Paswan said the BJP-JD(U) and his party’s alliance is “intact”. Former chief ministers Rabri Devi and Jitan Ram Manjhi also appeared to have mellowed towards Kumar. Kumar attended the iftar that Manjhi hosted. Rabri Devi said any decision on inclusion of new allies can be taken only in consultation with all allies.