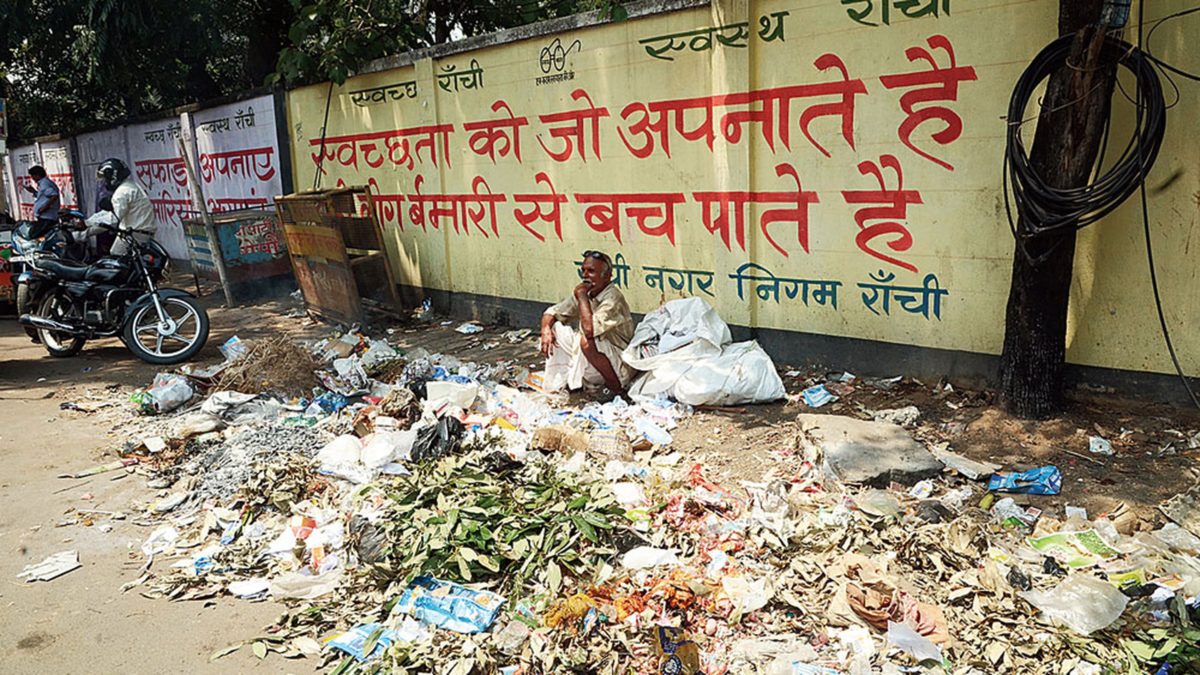 Ranchi Municipal Corporation (RMC) has worked out an elaborate plan to keep the capital clean, including daily inspections by senior officials and random verification calls to residents, now that the private firm hired to take care of garbage collection in a large section of the city has been sacked for poor services.

Among the other measures RMC plans to introduce are increasing the frequency of garbage collection and extending the doorstep collection facility to all 53 wards of Ranchi. “We want senior RMC officials to do the round of at least two-three wards everyday to check cleanliness,” said CEO of RMC Manoj Kumar.

“The officers will have to visit at least two-three wards every morning before reaching office. They will have to submit reports every 48 hours to ensure that workers carry out their duties diligently. We had issued a directive to this effect on Tuesday. We will also track garbage collection vehicles through GPS to ensure that waste collection vans comply with the set route chart,” he explained.

The private firm, Essel Infra, was supposed to undertake waste collection, transportation and its management in 33 of the 53 wards of the city. RMC was taking care of the remaining 20 wards. But after repeated complaints for residents of shoddy services, it was decided to terminate Essel Infra’s contract.

“Despite repeated reminders, the company failed to fulfil the terms of its contract. We had decided to terminate the contract in March, and after a cabinet nod earlier this month, we handed over the termination letter yesterday (Tuesday),” Kumar said, admitting that it would take the RMC some time to streamline its efforts.

Capital Ranchi generates nearly 700 tonnes of waste daily and its disposal is a challenge with residents regularly complaining of irregular door-to-door collection. Despite all efforts, RMC has barely been able to streamline garbage collection and disposal even after hiring a private firm. Now, it will have to take full charge of the capital’s cleanliness.

Kumar said as per the contract with Essel Infra, RMC started taking over the firm’s assets from Wednesday. The assets include manpower and various machinery (see box).

“As per our assessment, there is no problem in terms of manpower. There are some issues in terms of repairing vehicles which will be done soon,” Kumar said.

He said the daily monitoring by officials would take place, ideally, between 7am and 10 am.

“In any case, supervisors were responsible for verifying cleaning work. And now with senior officials monitoring the work every morning, they will be more diligent. Each senior official, including city managers, will be given a list of drains to ensure they are cleaned. They will also ensure that garbage vats are cleared regularly,” added Kumar.

This apart, RMC would make random telephone calls to residents to check the status of their area.

“We got contact numbers of residents during a survey carried out by students of Ranchi University. Calls would go out from the RMC control room. Any complaint would be dealt with immediately and workers and supervisors, if they are to blame, would be taken to task,” he said.

Also, Kumar added, that the frequency of waste collection would be increased. “Currently, collection is being done in the morning and evening. This will be increased to three to four times a day based on the needs of an area,” he explained.

RMC is also planning to float tenders to select separate agencies for door-to-door waste collection, transportation of waste to collection centres and processing of waste at the Jhiri dump. “We plan to complete the tender process by July so that work on the ground level begins by August-September,” said a senior RMC official.