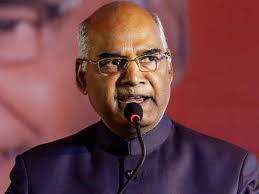 New Delhi: President Ram Nath Kovind will embark on a seven-day visit to the Philippines and Japan beginning on Thursday with an aim to expand bilateral cooperation, the Ministry of External Affairs announced on Monday.

“The President’s visit to the two countries reaffirms India’s commitment to strengthen its bilateral ties based on traditional bonds of friendship and mutual understanding,” it said.

The president’s first destination will be the Philippines where he will hold restricted and delegation level talks with his Filipino counterpart Rodrigo Roa Duterte in Manila and attend business and community events during his stay from October 17-20.

“The state visit is taking place on the occasion of 70 years of establishment of diplomatic relations between the two countries,” the MEA said.

From the Philippines, the president will leave for Japan on October 21 for a three-day visit.

He is visiting Japan to attend the Enthronement ceremony of the Emperor of Japan Naruhito, the MEA said.

In Japan, the MEA said the president will attend various ceremonies related to the Emperor’s enthronement and also a banquet hosted by Prime Minister Shinzo Abe.

“Along with participating in a community event, the president will visit a Buddhist temple and plant a sapling from the sacred Bodhi Tree in Gaya to highlight India and Japan’s historical and cultural linkages based on Buddhism,” the MEA said.