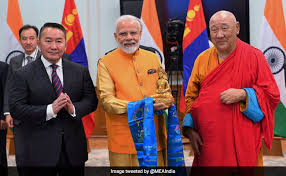 Amid the chanting of Buddhist prayers, Prime Minister Narendra Modi and Mongolian President Khaltmaagiin Battulga on September 20 jointly unveiled a statue of Lord Buddha at the Gandan Monastery in Mongolia via video.

The Mongolian president is on a five-day visit to India.

The golden statue with Lord Buddha holding a bowl was unveiled at a brief ceremony held at the prime minister’s Lok Kalyan Marg residence.

The Gandan Monastery is located in Mongolia’s capital Ulaanbaatar.

Just before the unveiling, young monks at the monastery chanted Buddhist chants. Soon after, a Buddhist monk present at the prime minister’s residence offered prayers as Modi and President Battulga stood with folded hands.

The Prime Minister’s Office on September 19 described the unveiling ceremony as a “symbol of India-Mongolia spiritual partnership and shared Buddhist heritage”.

In May 2015,PM Modi had visited the monastery where he presented a Bodhi tree sapling describing it as a token of friendship from the Indian people.Gandan is the largest and most significant monastery in Mongolia. Built in the mid 19th century, it is the only monastery where Buddhist services continued to function even during the Communist period.