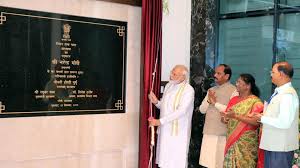 The ground plus three floors magnificent structure of the assembly building has come up on a site of 39 acres of land at HEC township near Jagannath temple. A symbolic one-day special assembly session has been convened on September 13 in this new building.

Inaugurating the assembly complex, Modi said, “It’s a historic day for Jharkhand. After 19-years of its creation, the state now gets its own assembly building and foundation stone of the proposed state secretariat has been laid.”

Appealing to the youths to must visit this assembly complex, Modi said, “One should not consider this building as a structure with walls only. It will lay foundation of the better future of state’s citizens. It will help in realizing the dreams of coming generations.”

Recalling the importance of these buildings, the Prime Minister said, “The recently concluded monsoon session was one of the most productive sessions of the Parliament after independence. The houses worked till night to discuss and pass important legislations. People felt happy to see it going. Credit goes to all MPs and political parties for giving effect to a healthy discourse.”

The dome shaped Jharkhand’s new assembly complex consists of Central, East and West wings and service buildings including covered car parking. A rooftop solar power plant of 500 KVA capacity have been set up over the car parking area. The campus is beautifully landscaped with three stage fountains in the south (front) and north (back). Besides, work is in progress to set up four half ball fountains.

The main attraction of the building is its large dome just overhead of the assembly hall. The dome has been decorated with traditional Jharkhandi arts from the inside. These arts will be illuminated with high quality lights.

The four-storied proposed state secretariat building will be constructed on an area of 33.60 lakh square feet in HEC township.