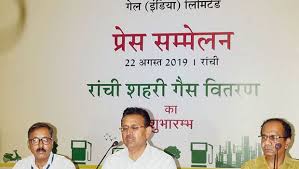 Two CNG supply stations and a de-compression unit at Shyamali colony from where PNG will be supplied will also be made operational simultaneously, said K.B. Singh, executive director (eastern region) of GAIL India.

“While PNG will be supplied to 3,000 houses initially, we have a plan to increase the number by 7,000 more within a year,” Singh said.

PNG, he said, will be 10 to 15 per cent cheaper compared to using LPG for cooking.

“In Jharkhand, 551km of natural gas pipelines are being laid at an estimated cost of Rs 4,366 crore that aim at supplying PNG to 10.46 lakh households in 12 districts when completed,” Singh said.

Of the two CNG supply stations that will start on Friday, Khukri petrol pump is near Rajendra Chowk in Doranda within the city while the other is at Madhuban near Ormanjhi, about 25km outside the city limits, he added. “GAIL plans to commission 11 CNG stations in Ranchi within a year that will supply CNG to over 75,000 vehicles,” he said.

He said they were also conducting awareness programmes for auto-rickshaw owners and drivers for smooth transition to CNG.

He said they would also organise meetings with bankers, vehicle suppliers and operators so that a conversion scheme (of existing vehicles) can be introduced.