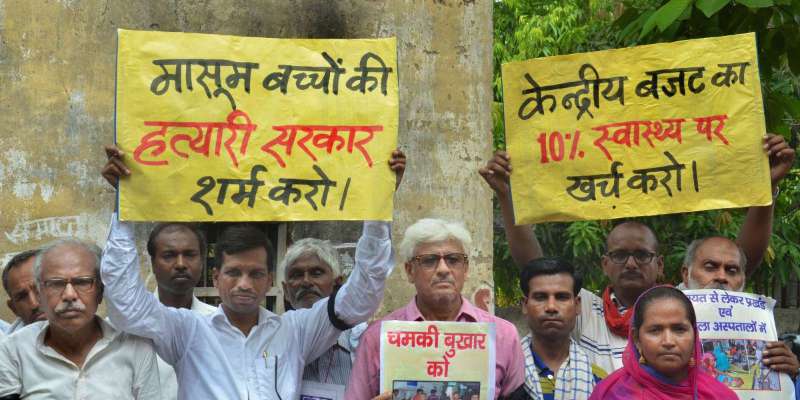 NEW DELHI: Today we kick off a series of stories revolving around the Fundamental Rights guaranteed by the Constitution of India. Through field reports, interviews, photo essays, histories and analysis, we discover these rights of strength and their shortcomings.

On June 25 police lodged an FIR against 39 people in Harivanshpur village in Bihar’s Vaishali district for carrying out the protests over the lack of water supply and the deaths of several of their children from the Acute Encephalitis Syndrome.

Even the parents of encephalitis victims have been charged with these crimes.

It was following the deaths of seven children from AES over two weeks that the residents of Harivanshpur staged a protest on June 23 and again two days later.

They also staged a protest demanding water tankers for their village, reports say, as there is an acute shortage of drinking water in the area and all the hand pumps have dried up.

The farmers and livestock of Vaishali district are the worst affected. There is no irrigation water available in the region, and with no groundwater left to tap, standing crops in the farms are drying up according to several reports.

Article 19(1)(b) of the Constitution of India guarantees the right “to assemble peaceably and without arms”. Freedom of peaceful assembly resembles the idea of a democratic government.

It is also reported that the residents of Harivanshpur have announced a missing person award of Rs.15,000 for Union Minister Ram Vilas Paswan.

Speaking to The Citizen, Amresh Kumar the area’s Block Development Officer said, “On June 23 the villagers staged a protest when the Hajipur MP Pashupati Kumar Paras and Lalganj MLA Rajkumar Sah came to the area and tried to hold them hostage. Following the incident, orders were given to the local officers to keep vigil and report any form of nuisance in the area.”

Ashok Kumar Singh, the Block Panchayati Raj Officer told The Citizen that “villagers blocked the highway for four hours and created nuisance. Most men have fled the village fearing rule of law after an FIR was filed against them.”

According to The Hindu “most of the children who died in Harivanshpur belong to the extremely backward Mallah community and the Dalit Musahar community.” One among them, Ganesh Manjhi, lost two sons within 24 hours due to suspected AES. They were 7 and 2 years old.