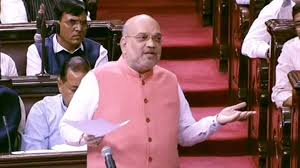 The government’s approach to managing strife in the state of Jammu and Kashmir will be guided by former prime minister, the late Atal Bihari Vajpayee’s approach of “Jamhooriyat (democracy), Insaniyat (humanity), and Kashmiriyat (the spirit of Kashmir)”, home minister Amit Shah said in the Rajya Sabha on Monday during a discussion on the state. At the end of the debate, the Upper House adopted a resolution to extend President’s Rule in J&K by six months, and passed a bill to ensure 3% reservations in jobs and education for people living near the International Border.

But the velvet glove of Vajpayee’s approach would also include an iron hand, Shah said in the Rajya Sabha, promising a tit-for-tat response to anyone trying to disrupt peace in the state. “They will be given a response in their language.”

In the course of the discussion, Shah added that assembly elections would be held in the state on the Election Commission’s advice and the government would not delay the polls “even by a day.”

During the debate, the leader of Opposition in the House Ghulam Nabi Azad said the government’s zero-tolerance policy didn’t seem to be working as attacks against security forces had spiralled during the last five years. “If you have zero tolerance, how come there have been 16 attacks including Pathankot, Nagrota and Uri,” he asked.

During his speech, Shah went on to elaborate on each aspect of his government’s policy regarding the state.

He said the concept of Jamhooriyat was not limited to electing MLAs. “For 70 years, 40,000 people who could have become sarpanchs were sitting at home.

We have taken Jamhooriyat to the villages,” he said. He asked the Congress why panchayat and municipal elections were not held before and why democracy in the state be restricted to “just three families”.

Speaking about Insaniyat, he said that under President’s Rule, schools were restarted, bureaucrats ordered to go to villages to take schemes forward, and residents were provided with electricity, toilets and food.

“We want development in the Valley. The Valley is ours and we want people to prosper like the rest of India. But we will not tolerate any separatist movement and terrorism. Terrorists who do not want to join with India have no place in the government’s scheme of things. They will face severe action and difficulties,” he said. Unlike in the past, foreign and defence policies have been segregated keeping national security at the core, he said, while talking of the 2016 surgical strikes and the Balakot strikes. “We want peace with the world but there cannot be peace with those who do not respect our borders,” he said.

Responding to a question from some members on the government’s continued criticism of India’s first prime minister Jawaharlal Nehru’s handling of the Kashmir situation, Shah asked why Nehru agreed to ceasefire when a third of Kashmir was with Pakistan, why India went to the United Nations after the instrument of accession was signed, and why a plebiscite was required. “Was it not a mistake? Will we not learn from our mistakes?” If the Kashmir problem has not been solved from 1947 to 2019, surely it is time to go for a new approach, he added.

Azad accused the government of using President’s Rule as a ploy to run the state from New Delhi. “Stop running the government from Delhi. That will be the biggest confidence-building measure,” he said.

Shah dismissed the allegations in his detailed, one-hour long reply to the five-hour discussion on two bills. “We have no drought of governments. We are there in 16 states. We have no desire to rule through the President’s Rule,” the minister said.

Responding to the criticism that if elections could be held for panchayats and Lok Sabha, why couldn’t they be held for the assembly, Shah said security forces had their reservations about being able to provide security to more than 1,000 contestants and had conveyed it to the Election Commission.

The Jammu and Kashmir Reservation (Amendment) Bill, 2019 will allow people living near the International Border to benefit from a 3% reservation that was so far available only to those living along the Line of Control and Line of Actual Control. Shah said this would benefit more than 350,000 people living in 435 villages scattered across the districts of Jammu, Kathua and Sambha.

Former chairman of the National Commission for Minorities and former divisional commissioner of Kashmir Wajahat Habibullah said there was no choice but to extend President’s Rule at this point. He said the people living close to the International Border faced the same vulnerabilities that those near LoC faced and the reservation bill was a good move.