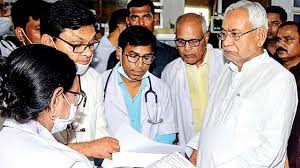 Riding on the recent health indicators portraying growth and betterment in the health services in the State, Chief Minister Raghubar Das today appealed to investors to help improve health facilities in Jharkhand by means of opening hospitals, especially in rural areas. The CM said that the government will provide subsidy and all facilities to the investors for the purpose.

Addressing people during the inaugural ceremony of Healthcare Summit Jharkhand-2019 here on Thursday the CM said that if any investor builds a hospital in a rural area, the government will give them 75 per cent subsidy on land value for the purchase, 50 per cent in the block headquarters and 25 per cent in the urban area. The investment (single door) will be through a single channel, he said.

“Jharkhand was ranked third in the NITI Aayog’s State index for incremental growth. It is the result of continuous growth of State in the field of health since 2014. In the year 2000, the maternal mortality rate in Jharkhand was 400 per lakh, which decreased to 165 per lakh, infant mortality rate was 72 per thousand, which decreased to 29 per thousand, institutional deliveries which were only 13.50 per cent which increased to 80 per cent and complete vaccination was 9 per cent which increased to 87 per cent. Jharkhand ranks third in providing OPD service in hospitals across the country. These facts indicate that the State is on the path of reform in the field of health,” said the CM.

Das said that till September 25, 2 crore 85 lakh people of the State will be covered by Golden Card under Ayushman Bharat Yojna. As many as 57 lakh families of Jharkhand will have benefit of this scheme. Golden cards have been made available to 39,13,000 families. A total of 2,26,000 beneficiaries have been taken advantage of the scheme. An amount of Rs 206 crores has been spent for this. To provide maximum benefit of the scheme to the poor, a 300-bed hospital has been arranged in Jamshedpur, where only patients coming under the Ayushman Bharat scheme will be treated. The State has 429 private and 219 government hospitals listed under the scheme. The government will also waive the fee being taken for the golden card in the Pragya Kendras from August 16, 2019, for the poor,” added he.

The CM said on death anniversary of Atal Bihari Vajpayee, Atal Clinic will be opened in every ward.

Das said that the people of the state are getting 108 ambulance facilities. About 5,000 calls are being received every day. The treatment of 8,000 patients is being ensured by 108 ambulances. This service is more effective in tribal areas. Through CSR also, the government is providing the facility of bike ambulance to the poor in remote areas.

Health Minister Ramchandra Chandravanshi said that the government is working towards providing better health facilities. “We are committed to ensure that people get health care up to their doorstep. On September 25, 57 lakh families will be given a Golden Card. The government has added 32 lakh additional families in Ayushman Bharat Yojna. In the last 10 months, 2 crore 19 lakh patients have been treated under the scheme. The present government has established a medical college to provide healthcare,” he said.