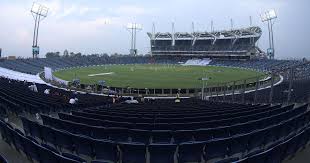 Test cricket is the format that brings out the best in cricketers but it certainly isn’t managing to bring people to stadiums in India. The recent Ashes series between England and Australia witnessed houseful stands but in India, Test cricket is going the Ranji Trophy way – with empty stands greeting the players more often than not.

The third Test of the India-South Africa series will be played in Ranchi from October 19 but the Jharkhand State Cricket Association already knows that not too many people will be turning up to watch the game.

Till Thursday, according to a report in The Indian Express, JSCA had managed to sell just 1500 tickets for the game, which will be played at Ranchi’s 39000-capacity stadium. The low sales have come despite the association trying to keep ticket prices affordable with Rs 250 per day being the lowest.

The new JSCA president, Nafis Khan said: “Next time, maybe we have to think twice before hosting a Test match. At the same time, we can’t say no also. If the state associations start rejecting Test cricket, the purest form of the game would die. It’s very sad to see empty stands. We have to make certain changes to the Test format.”

India doesn’t make it easy for spectators either. At Pune, only a handful of spectators thought it was worth their while to turn up to watch India make history. The stands are not covered and the heat means that watching – forget enjoying – is not a good experience.

School children were given free tickets in Pune and they added to the atmosphere a bit but they too were forced to sit in the harsh sun for the entire day. In Ranchi too, JSCA has distributed 5,000 complimentary tickets to the CRPF and another 10,000 tickets to schools, clubs and academies.

But it won’t be enough. Test cricket in India has long been in decline as a spectator sport. Its appeal to the modern Indian fan is limited. T20 cricket and ODIs are a party but what does Test cricket at the stadium really offer to the fan?

BCCI’s president-elect Sourav Ganguly feels that India should look at day-night cricket much more seriously and while that may not be the whole answer, it may certainly be part of it.