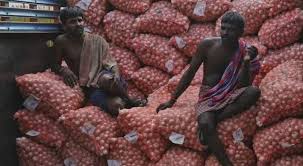 At a time when apple is cheaper than the onion in the retail market in Patna and other districts across the state, a gang of thieves reportedly targeted a wholesale onion godown in Sonaru locality near Patna and stole the onions.

“It is true that a case of theft of onion was lodged by a wholesale onion trader. Police have begun investigation into the case and are conducting raids to recover onion bags that were stolen,” said Manish Kumar, officer in-charge, Fatuha police station, while speaking to NewsClick on Monday.

He added that video footage of a CCTV from a nearby locality is being examined.

Onion trader Dheeraj Kumar is upset after his 328 bags of onion were stolen by thieves. “I have never thought that onion will become a target of thieves. It all happened after prices of onion crossed Rs 50 [per kg] in the wholesale market. This incident of onion theft—first such instance in my memory—has created fear among the onion traders who are now taking extra care and are ensuring security of their godowns as well as shops,” said Dheeraj.

He confirmed that he has a filed a complaint with the police.

Another wholesale trader from the old Patna city, Krishna Prasad, said that onion has become a costly item following its unprecedented selling rate in markets. “We were shocked to know that thieves have targeted an onion trader,” he said.

Kanchan Devi, a housewife, told NewsClick that she has been forced to reduce the use of onion in cooking, as it is very costly. “I used to put half a kg onion to prepare foods for the family of five twice a day. Now, I am using hardly 200 grams,” she said.

A grocery shopkeeper, Mahesh Mahto, and a vegetable seller, Zahoor Alam, said that the demand for onion has drastically fallen in the last one week following the increase in its prices. “We are selling onion at Rs 60 per kg, but others are selling at Rs 70 to 80 per kg in Patna itself,” Alam said.

Saket Kumar, a businessman, told NewsClick that people have are buying and using less onion now. “Onion was selling at Rs 35 to 40 per kg till about a week ago, but it has almost doubled now.”

Rate of this essential vegetable is expected to touch even Rs 100 per kg in coming days, as the government has not brought in any measure to bring its price down.

In Bihar, onion is exported mainly from Maharashtra and South Indian states.