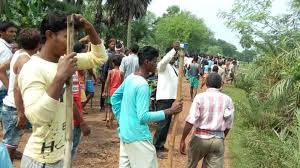 A panicked leopard went on rampage in a Jharkhand village on Monday morning killing one woman and injuring seven others, forest officials said.

The attack took place in Pakur district’s Nashipur village under Maheshpur block. A team of forest officials reached the village but faced an uphill task to capture the leopard in absence of its experts and a tranquilliser.

“The leopard entered the village early in the morning and killed one Sonamoni Tudu, 65, who had gone to collect mushrooms in her farm field. Leopard bites were found on her neck and shoulder,” said Anil Kumar Singh, forest range officer, Pakur.

Singh, who is camping in the village, said the villagers with sticks and other weapons tried to capture the animal in the morning but the panicked leopard injured seven of them.

“Six people were sent to Maheshpur hospital for treatment while one Stephen Hansda,40, who is serious, was referred to PMCH, Dhanbad,” Singh said.

Forest officials gave away Rs 25,000 to Tudu’s kin for final rites and Rs 25,000 to Hansda for treatment. As per the forest department’s rule, a compensation of Rs 4 lakh is given if one dies in a man-animal conflict.

Singh said, “The village crowd is posing trouble in driving away the animal. If need arises, we will impose section 144 to keep the situation under control.”

Singh said houses in the village were scattered and there were farm fields in between the houses where the leopard was hide and seek.

“Since we neither had tranquilliser nor its expert to capture the leopard, we have sought guidelines from the divisional forest officer,” he said.

Villagers said this was the first incident of killing by leopard in the village in recent years. One such incident took place a year back at Agua hill, which is located five kilometer away from the village, a villager said.

The forest officials said the leopard might have come from the Agua hill where forest cover was degrading for past few years. The animal might have deviated from its route and entered the village.

State wildlife board member DS Srivastava said, “Santhal region has good population of leopards. With tree cover degrading in the region, now they are coming out of the forest and entering villages in search of food.”