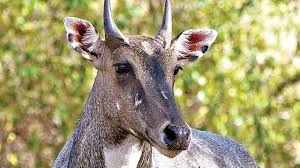 Many nilgai (antelope) were shot by hired shooters of forest department in Vaishali district of Bihar. Most nilgais died on the spot. The forest department of Vaishali district has claimed to have killed over 300 nilgai in the last four days. However, an injured nilgai met a tragic end, when it was buried alive after being pushed into the pit by a JCB machine. The video of the incident went viral and drew widespread condemnation.

On the initiative of Vaishali MLA Rajkishore Singh, with the cooperation of the state government and local administration, a shooter was called to carry out the gruesome killings, just to solve the problem of farmers who complain of their crops being destroyed by the nilgais. When the video went viral, Singh questioned the veracity of the video circulating on WhatsApp groups and termed it a “fabricated video”. However, the MLA wasn’t asked to respond to or questioned over the video, which suggests he had anticipated possible backlash and to avoid slander, tried to clear his hands.

As soon as the information of this whole matter came in, Vaishali SP Manavjit Singh Dhillon instructed the local Bhagwanpur police station to investigate the veracity of the viral video and when its authenticity came to light, sought clarification from forest department officials to take action on the people responsible for the live burial.

Meanwhile, Singh said, “This incident didn’t happen under my watch. I would not have allowed it to happen if I knew it. I had requested the DM to call the shooter and kill the Nilgais to reduce their numbers, after which forest department shooter came and shot Nilgais in many villages. The live burial is inhumane and I condemn it. Authorities will take the necessary actions.”