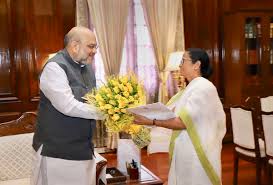 West Bengal chief minister Mamata Banerjee on Thursday told Union home minister Amit Shah that genuine Indians belonging to Bengali, Bihari, Gorkha and Assamese communities were excluded from the NRC in Assam and sought his intervention to ameliorate their miseries.

Banerjee told this to Shah in her first meeting with the home minister, who assumed office about three months ago.

“I have come to meet the home minister to discuss about the NRC in Assam and told him that many genuine Indians were excluded from the list. I have requested him to do the needful so that they can be included in the NRC as they are in distress,” she told reporters after the meeting with Shah.

The chief minister said that among those who were excluded from the National Register of Citizens include many Bengali, Bihari, Gorkhas and even Assamese.

“I have requested him to examine their cases and resolve the issues,” she said.

The final NRC, a list of Assam’s residents published on August 31, excluded the names of 19 lakh people.

“The home minister has assured me that he would look into it,” she said.

Asked whether there was any discussion on the implementation of the NRC in West Bengal, Banerjee said no such discussion has taken place but it was her stated position that such an initiative was not required in her state.

“Even Bihar chief minister Nitish Kumar said that the NRC was not required in his state,” she said.

The chief minister said she has come to New Delhi after she was given an appointment by Prime Minister Narendra Modi for a meeting.

“Meeting the Prime Minister and the home minister is a constitutional obligation. Besides, we have international border issues with Bangladesh and Bhutan and state borders with Bihar and Jharkhand. We also have the sensitive ‘chicken’s neck’ (corridor connecting northeastern states with the rest of the country). So meeting with the home minister is in that context necessarily,” she said.

The chief minister said she has met the prime minister on Wednesday and raised the issue of renaming the state.

Banerjee also invited Modi to inaugurate a coal block in the state. The coal block is the second largest in the world, she said.