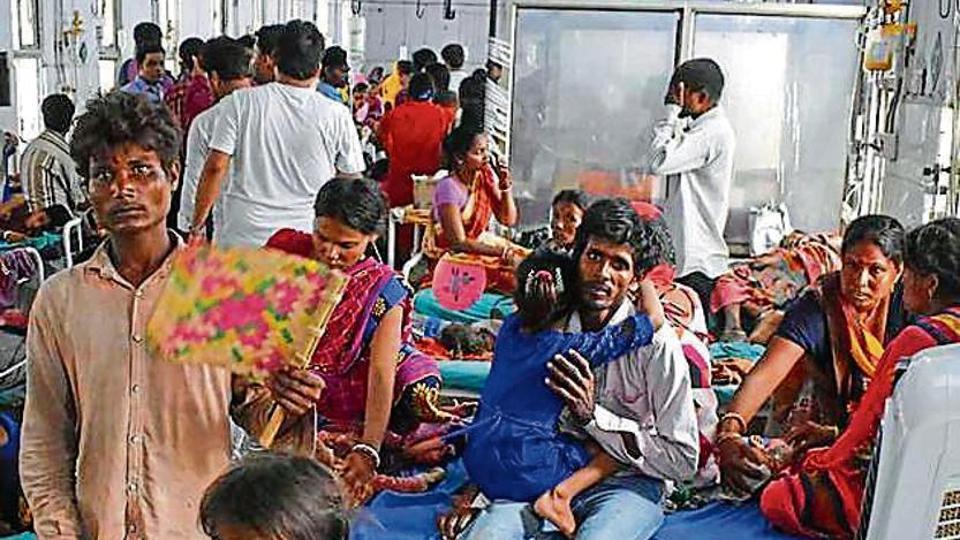 Unlike previous years, the summer this year initially brought wide smiles on the faces of farmers in Bihar’s Muzaffarpur district as the region witnessed a bumper crop of litchi, the luscious fruit grown abundantly here. The joy, however, was short lived as the crop once again came under the scanner of researchers and medical experts following the death of 204 children and 938 cases in hospitals across the state due to the Acute Encephalitis Syndrome (AES).

The deaths dealt a severe blow to the litchi industry which has resulted in huge losses for the farmers and traders involved in the seasonal business that is a major source of revenue for the local economy.

Bihar is the top litchi producing state in India and according to figures provided by the former union agriculture minister to Lok Sabha last year, the state accounts for 300,000 metric tonnes of litchi, which is produced on 32,000 hectare areas. Bihar’s contribution in the production of litchi is about 40 percent

Mohammed Nizamauddin, a prominent litchi farmer and trader from Muzaffarpur, is yet to come to terms to the enormous loss. Nizam, as he is fondly called, has been in the business for more than a decade now. This year he suffered losses to the tune of around Rs 1.5 million.

The loss has put all his plans to visit a tourist destination in a quandary.

“Negative propaganda about the fruit, which has high protein and nutritional value, took a toll on its demand and supply,” lamented Nizam.

Other litchi growers across Muzaffarpur are facing a similar situation due to the negative publicity of the fruit following the AES deaths.

Traders said that the industry has suffered losses to the tune of Rs 100 billion. Last year the litchi traders did a business to the tune of Rs 60 billion and due to bumper crop this year, they had expected the business to rise to Rs 100 billion. Besides, export, supply of the fruit to various processing plants has been adversely hit. The litchi farmers and traders are worried as their crop has been blamed for a disease that still remains a mystery and there is no authentic proof of its connection with AES.

Thakur exports litchi juice to USA, Australia, New Zealand besides supplying the same to Mumbai and Delhi. “No orders came this year either from USA, Australia or New Zealand causing a loss of Rs 3 million,” said Thakur, who has an annual turnover of Rs 30 million.

Thakur is not alone. “There are close to one lakh people including producers, businessmen and labourers who are directly or indirectly involved in this litchi business in four major litchi producing areas of Muzaffarpur, Vaishali, Samastipur and East Champaran,” said Bachcha Singh, president of Litchi Grower’s Association.

According to a report by the Bihar horticulture department, there are 45,000 litchi-growing farmers in Muzaffarpur alone.

“The AES false propaganda, though it came at later stages, must have caused a loss of more than Rs 1 billion alone in Muzaffarpur,” said Singh.

“Such was the impact that litchi, which usually disappears from the market by mid-june, had no takers till June 25 this year,” added Singh.

The Litchi Grower’s Association president cited that another reason for mounting loss has been the railway’s decision to discontinue the services of parcel van in Pawan Express for Mumbai forcing litchi traders to send their product by trucks. “We used to send 30 tonnes of litchis per day to Mumbai by Pawan Express. But after the railway’s withdrew the service in 2018, the fruit is sent by truck as a result of which, one-fourth of the total litchis get damaged and the fruit also doesn’t remain fresh, resulting in low price,” rued Singh.

Smelling a conspiracy, Thakur said that same litchis did not cause any problem in Uttar Pradesh.

Thakur and other traders have found support from BJP MP Rajiv Pratap Rudy and BJP Bihar MLC Sanjay Paswan, who alleged that a campaign was launched against litchi under a conspiracy.

India is the second largest producer of litchi in the World after China. Other major litchi producing countries are Thailand, Australia, South Africa, Madagascar and Florida in US.

Among fruit crops, litchi ranks seventh in area and ninth in production but is sixth in terms of value in India. The national average productivity of litchi is 6.1 t/ha, which is much lower than the realizable yield of the crop under well managed condition.