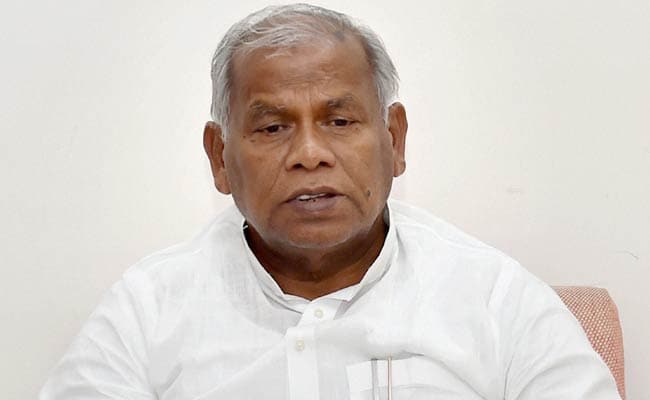 PATNA: Disarray in the opposition Grand Alliance in Bihar again emerged on Friday when former Bihar Chief Minister Jitan Ram Manjhi’s fresh threat of pulling out of the five-party formation was rubbished by other coalition partners as his pressure tactics.

They expressed the view that the Hindustani Awam Morcha (HAM) chief was merely trying to play hardball and would ultimately fall in line.

Mr Manjhi had announced at the meeting of his party’s national executive meeting in Bihar capital Patna Thursday night it will go it alone in Jharkhand where it has never contested an election so far and field its candidates in all the 243 assembly segments in Bihar when Vidhan Sabha polls were held next year.

The mercurial leader, however, was yet to make up his mind as to which seats to contest in Jharkhand where elections have been announced and polling would commence by the end of this month.

His announcement of fighting all the Bihar seats was in line with his repeated threats issued in the aftermath of the drubbing received by the grand alliance in the Lok Sabha polls.

HAM had lost all the five Lok Sabha seats it had contested, including Gaya which Mr Manjhi himself lost to a relative newcomer Vijay Manjhi of the JD(U).

Speculation is rife that after having gravitated to the grand alliance last year, when he quit the NDA and ended up clinching a legislative council berth for his son from the quota of the RJD the wily leader may be eyeing a return to the formation headed by the BJP which seems on the upswing in the state as well as the country.

However, Mr Manjhi firmly denied any plans to return to the NDA when asked by reporters on Friday.

NDA sources say that Mr Manjhi’s entry is likely to meet with stiff opposition from Chief Minister Nitish Kumar, who heads the JD(U) and against whom the HAM president had revolted before floating his own outfit.

Besides, the LJP of Ram Vilas Paswan would also not like to share his political space with another Dalit leader.

“He may be having some demands which are not being met. But that happens to all parties in a coalition. Once the process of campaign for Bihar assembly elections picks up, he is going to find no other abode except the grand alliance”.

The views were echoed by Congress Rajya Sabha member Akhilesh Prasad Singh, who hoped that his current foul mood notwithstanding, Mr Manjhi will be firmly with the grand alliance when the poll bugle is sounded in Bihar.

Interestingly, former Bollywood set designer Mukesh Sahni whose support Mr Manjhi has been counting on since the recent by-polls, ended up at a press conference addressed jointly by leaders of the grand alliance and Left parties as a show of solidarity among forces opposed to the BJP-led coalition, which rules the Centre as well as the state.

The press conference was organized by RLSP chief Upendra Kushwaha on Friday and Mr Manjhi took care to ensure no leader of his party attended the same.

However, RLSP national secretary general Madhaw Anand told PTI “we are not able to understand the grouse of Manjhi, who is a senior and respected leader. He seems to be impatient about things like the grand alliance chief ministerial candidate and the respective share of seats for each constituent. We can only urge him not to cause more damage to the Mahagathbandhan by haste,” Mr Anand said.

Mr Anand was hinting at Mr Manjhi having fielded his candidate from Nathnagar assembly segment where by-polls were held last month and which the RJD lost by a margin less than the number of votes secured by the HAM candidate.

Taking a cue from Mr Manjhi, Mr Sahni had also fielded his party’s candidate from Simri Bakhtiyarpur though it did not come in the way of the RJD wresting the seat from JD(U) by a comfortable margin.

Mr Manjhi’s defiant stance during elections had followed repeated attacks on RJD leader Tejashwi Yadav on whose inexperience he blamed the Lok Sabha debacle of grand alliance and threw his hat in the ring for being projected as the opposition coalitions cm candidate, much to the annoyance of Lalu Yadav’s party.