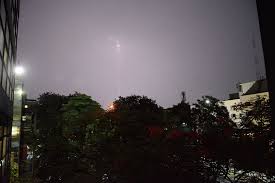 ightning, which kills over 130 people in Jharkhand on an average every year, will be a part of the academic curriculum in over 2,000 government schools from the next session.

A proposal by the disaster management department to include lightning and related safety parameters in the syllabus has been accepted by the state executive committee, which, led by chief secretary D.K. Tiwari, coordinates and monitoring its many initiatives.

“The executive committee will hold a final discussion, primarily the nitty-gritty, at its meeting soon. After that the chief secretary will issue formal guidelines,” said Manish Kumar Tiwari, joint secretary, home, prisons and disaster management.

Sources said the executive committee meeting would have senior bureaucrats of various departments, including principal secretary of school education and literacy A. P. Singh, who will be a special invitee since the proposal deals with his domain.

“The meeting is scheduled to discuss threadbare details like contents of the proposed chapter on lightning and the subject under which the chapter would be included for teaching in classes 8, 9 and 10. The subject will be introduced from the 2020-21 academic session,” said an official.

The state disaster management department will also be sending directives to deputy commissioners of all 24 districts, asking them to disseminate information on lightning safety during assembly in schools.

“Deputy commissioners of Bokaro and Hazaribagh have already started talking about the dos and don’ts on lightning safety during assembly at state-owned primary, middle and high schools. We would like other districts to do the same,” said Tiwari.

The state disaster management authority, which functions under the department, is planning to launch its own GPS-based software project to prevent casualties arising out of lightning strikes.

Officials said the software, designed by Jharkhand Agency for Promotion of Information Technology (JAPIT), aims to issue alerts to people in lightning-prone areas based on inputs from Ranchi Met office.

“The software will automatically send text messages to smart phones in the area (the phones need to switch on their location service) asking users to take precautionary measures. Our motto is to curb casualties. We are planning to roll it out on Independence Day,” Tiwari said.