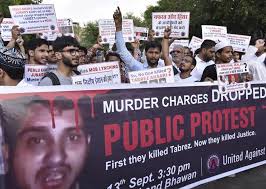 The Jharkhand police on Wednesday reimposed section 302 of the Indian Penal Code ( murder) in a supplementary charge sheet filed against 11 accused in a case involving the mob lynching of 24-year-old Tabrez Ansari in Dhatkidih village under Seraikela police station (PS) on the night of June 17-18 this year, district police officials said.

Police also pressed the same charge against two others accused in the case.

The police dropped the charge of murder in the first charge sheet submitted in the Seraikela court on July 23 and charged the 11 jailed accused under section 304 of the IPC (culpable homicide not amounting to murder) citing the autopsy report and viscera report that mentioned cardiac arrest as the cause of Ansari’s death on June 22.

Ansari died during treatment at Seraikela Sadar Hospital, four days after he was brutally beaten up by an angry mob for allegedly trying to burgle the house of Kamal Mahato in Dhatkidih village during the intervening night of June 17 and 18. He was handed over to the police by villagers on June 18 and sent to jail the same day. His thrashing was captured on a video.

The absence of the murder charge in the original charge sheet prompted outrage; the police were already under fire for not admitting a clearly injured Ansari in hospital soon after it apprehended him.

“Seraikela police submitted a supplementary charge sheet in Setaikela court today under section 302 of the IPC after ongoing investigation against two more accused was completed. Since the second autopsy report has further elaborated and pinpointed cause of death and the forensic report has also confirmed the integrity of the lynching video, section 302 of IPC has also been re-imposed against all the 11 jailed accused,” said Navin Kumar, South Chotanagpur inspector general of police (IGP).

Kolhan DIG Kuldeep Dwivedi in a statement on Wednesday said that viscera report from forensic science laboratory (FSL), Chandigarh, attributed Ansari’s death to cardiac arrest but added that it did not pinpoint the exact cause of death.

The police got another an autopsy test done by a board of doctors of the Mahatma Gandhi Memorial Medical College Hospital (MGMMCH) in Jamshedpur, he added.

This showed that the cardiac arrest was caused by heart chambers filling with blood as a result of the beating he received, he explained in the statement. “The forensic report of the lynching video also confirmed its integrity and stated that no tampering was done with the video, therefore, section 302 is being imposed against all the 13 accused.”

Ansari’s widow Sahista Parveen expressed her happiness that the murder charge has been reimposed against all the accused but sought a CBI investigation into the case.

“This is victory of our fight for justice. Imposing section 302 sure has sparked hope for justice but I still demand a CBI probe so that the culprits can’t escape by any chance. I want all of them to be hanged to death,” Parveen said.