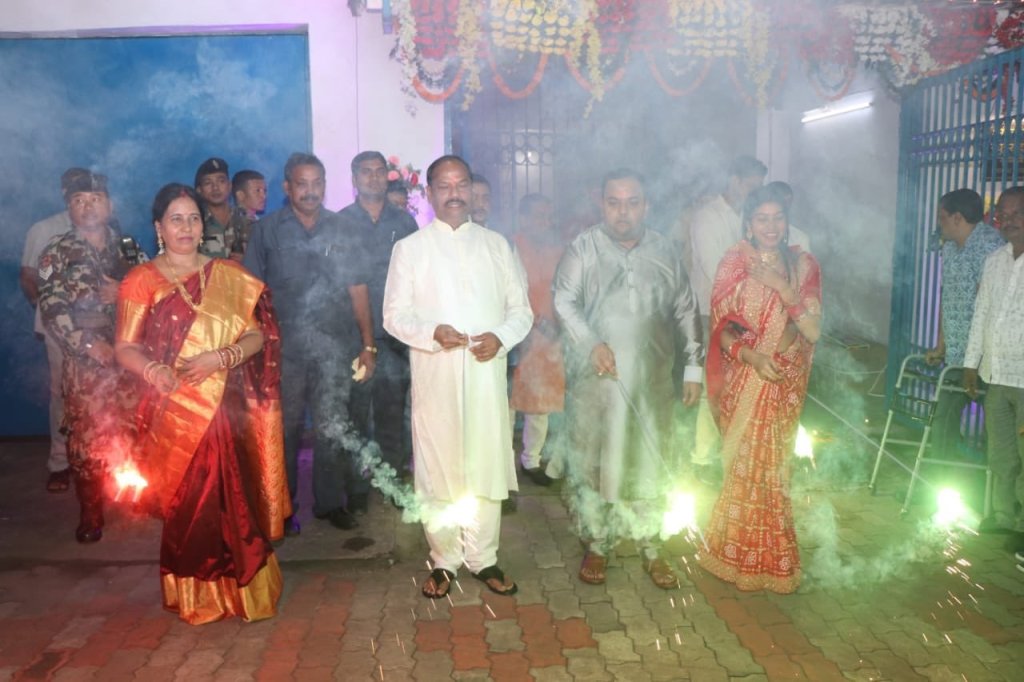 Jamshedpur: Chief Minister Raghubar Das celebrated ‘festival of lights’ Diwali with spouse Rukmini Devi, son Lalit Das and daughter-in-law and family members at Agrico area on Sunday. He met well-wishers and extended warm wishes to the people. The Chief Minister prayed for the welfare of the State.

On Monday, Das performed rituals to mark Govardhan Puja. After the rituals, he inspected several areas under his Legislative Assembly Area Jamshedpur East. Das, who was in city to celebrate Diwali, went to various areas in Burmamines and personally interacted with residents and took stock of development schemes. According to information, he asked authorities to focus on cleanliness of the areas.

He went to Raghubarnagar and met with locals. Talking to local citizens he said that the Government is dedicated towards development of State with special focus on cleanliness and infrastructure. He said that the people are reaping the benefits of the several welfare schemes is his Government’s priority.

Das further added that the government would work efficiently in bringing speedy development, providing basic amenities and improving policing. He also said that ensuring corruption free governance will be his foremost priority. He also emphasised that his government would be accountable and ensure rapid development by utilising the abundance of natural resources.

Chief Minister’s legislative assembly area representative, Pawan Agarwal said that the Chief Minister has sought a report on two acre vacant land at Raghubarnagar. He asked local authorities to prepare a report so that the land can be used to develop G+ 8 residential areas for the needy families.

Meanwhile the Chief Minister also visited several Kali Puja Pandals and sought blessings. The festival of lights, Diwali, also marks the beginning for worship  of deity, Goddess Kali. Festivities and enthusiasm for Kali Puja in city is same as seen for Diwali. Performing the Puja with faith devotees seek

protection against drought and war and blessings of general happiness, health and prosperity.

In Jamshedpur a number of Kali Puja pandals were constructed for the occasion. On Sunday the pandals were inaugurated amidst enthusiasm.

“Kali puja is also an important occasion for us and every year we look forward to celebrate in traditionally. A massive pandal have been constructed for the occasion. The festival is usually celebrated

He said that though the pomp and show during Durga Puja is much higher but the devotion and festivities for Kali Puja are none the less. Meanwhile a number of Kali puja pandals have been constructed at Sonari, Burmamines and Pursudih.