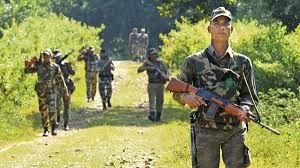 NEW DELHI: As floods knifed through Bihar and forces scrambled to aid rescue operations in the state, a telephone call on the afternoon of 22 July in the state’s Bodh Gaya district changed the order of the day: Naxals had infiltrated into the area and had orders to carry out a big operation against security forces.

It was that phone call which ultimately led to one of the biggest anti-Naxal operations in the area in recent years, on Thursday afternoon, leading to the Naxal camp being wiped out by security forces.

From that day on — even as the Central Reserve Police Force’s (CRPF) intelligence wing began to scramble for inputs, which came in abundance – even though it was business as usual, forces were sworn to complete secrecy over the upcoming operation.

“Intelligence Inputs by sources developed by CPRF had been pouring in since 22 July about presence of a Maoist squad in this area and therefore an operation was planned after corroboration of inputs with the assistant superintendent of police (ASP) of Operation in Gaya and Aurangabad, along with a combined team of CoBRA (Commando Battalion for Resolute Action) and the CRPF,” said a senior CRPF official, seeking anonymity.

With the Naxals’ new commander Basavraj already having lost one of his key men Madkam Hidma to an encounter earlier this week, the armed cadre of the Naxals had come prepped to inflict maximum damage, from neighbouring Chattisgarh.

“All these teams were inducted from different routes with utmost deception avoiding all possibilities that could have alerted the vigilant Maoists of our plan. Their activities in the area have been persistently tracked and monitored through recent operations,” the official quoted above added.

While tactical action teams of Indian security forces had been inducted in complete secrecy, amid incessant rains, they were stationed at the respective locations at the break of dawn on Thursday.

“The CoBRA Strike came in direct confrontation with the Maoist sentry stationed few meters away from a temporary makeshift camp. Although the Maoist sentry emptied his rifle magazine, trying to push back the advancing Commandos, they (commandos) tactfully managed to dodge his bullets, quickly flanking and encircling this temporary camp meanwhile engaging in retaliatory fire,” said another senior security force official, requesting anonymity.

By the afternoon of Thursday, a full gun battle had been raging between the security forces and Naxals in the area of Sathnadia Nallah of Chakkarbandha forest in Bodh Gaya.

“An Exchange of Fire erupted between the CoBRA Commandos and CPI Maoist cadres at approximately 12:30pm on Thursday afternoon near Chakkarbandha forest. After half hour of gun battle, Cobra commandos managed to overrun the camp of the Maoists without any harm or loss on their (CoBRA) side. Five IEDs (improvised explosive devices) were planted in the vicinity of this camp, which were safely diffused by troops,” said the CRPF official.