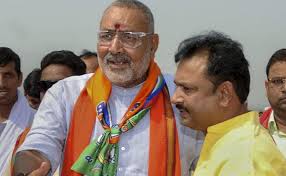 Begusarai(Bihar): Union minister Giriraj Singh on Sunday gave a dressing down to a government official in his Lok Sabha constituency here for apparently showing reluctance to alight from a vehicle while speaking with him.

Singh has been touring flood-affected areas of his Lok Sabha constituency since Saturday. This morning, while he was travelling on foot, accompanied by supporters, local residents and a Deputy Superintendent of Police Ashish Anand, the car of Nishant, Sub-Divisional Officer of Teghra, pulled up close by.

When Singh addressed the official, he replied from within the car, irking the minister’s supporters.

The firebrand BJP leader got sore and remarked, “Why would he alight from his vehicle. He is a babu (an honorific used in Bihar to describe bureaucrats). I greet him with folded hands.”

The official, subsequently, got out of his car and tried to placate Singh, who gave him a piece of his mind.

“While touring this area I have heard a lot of tareef (praise) for you from the people. Please ensure that more of this does not happen,”

“You must ensure that relief is provided to all the people of the sub-division without any discrimination. I remember that a relief camp had been set up here in 2016 when areas were similarly inundated. A camp should be set up again. Else I am going to stage a dharna in front of your premises,” he told the official, who nodded with folded hands.

Singh also said that he would apprise the chief minister and the chief secretary of the flood situation in his constituency. “And please do not remain under the illusion that I will be content with speaking to you. I am going to speak to the Chief Minister as well as the Chief Secretary about the flood in my constituency. So you better set your house in order,” he warned.

Singh gave up his sitting seat of Nawada in the general elections this year and retained Begusarai for his party by trouncing CPI’s Kanhaiya Kumar by over four lakh votes.