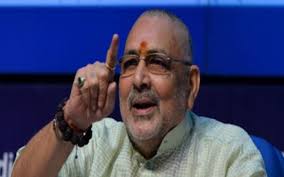 It is being long speculated that Union minister and the firebrand leader of Bharatiya Janata Party (BJP) Giriraj Singh is likely to replace Nitish Kumar as Chief Minister, if the Saffron party outscores JDU in Bihar Assembly polls. However, putting all the speculations to the bed, Giriraj Singh on Tuesday asserted that his political innings may “come to an end” with the completion of the second term of Prime Minister Narendra Modi.

It is to be noted that that the clarification from Giriraj Singh comes in reply to the reporters’ queries about him being a probable chief ministerial candidate after the assembly polls in Bihar next year. The BJP leader said, “I am one of those party workers who entered public life to fulfil the dream of integration of Kashmir pursuing which Syama Prasad Mukherjee had sacrificed his life. PM Narendra Modi has achieved that.”

“I did not enter politics to acquire positions of power. So now I see my political innings nearing its end. It may come to an end with the completion of Modi’s ongoing tenure, Giriraj Singh added.

It is worth mentioning here that Assembly elections in Bihar for all 243 seats will be held in October 2020. The term of current assembly, which was elected in 2015, will culminate on November 29, 2020.