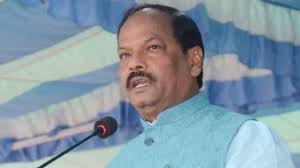 Chief Minister Raghubar Das today held seven back to back public meetings at various locations in Santhal Pargana on day one of Johar Jan Ashirwad Yatra. The CM gave message of development to people appealing them to tread the road of development by supporting the BJP in upcoming polls. “Political parties using the name of Jharkhand consider the naive public of Santhal only as vote bank. Our government has worked for the all round development of Santhal Pargana. You have the right to know from the Jharkhand Mukti Morcha and the Congress why till 2014 only 38 lakh families out of 68 lakh families had access to electricity.

Why children in schools were forced to sit on jute sacks? Why the mother and sisters of the State could not get freedom from the life of smoke? Why could the poor not get their own houses? Why they did not build toilets in honour of women? Why there was no health insurance for the poor? Why did they not become the carrier of economic prosperity of farmers? Why did they not remove the stigma of corruption from Jharkhand? They do not have the answers to these questions because they do politics of rumor and propaganda. But, now it will not work. The days of false and deceitful promises are gone,” said the CM. Das said that now the people of Santhal want a working government, Bharatiya Janata Party government. “For 14 years JMM, RJD, Congress continued to do politics of manipulation. Their purpose was only to gain power. By filling their pockets, they have deceived the people of the State. This time you have to take them out,” he said while addressing various public meetings in Santhalpargana on Thursday.

The CM said that in the last five years, there has been an effort to bring a ray of development to the people of Jharkhand, who are waiting for development since independence. “We do not say that we have changed things completely, but have started development work. We still have a long way to go. I have come to you for giving account of the last five years of development work. I hope you get your blessings for the next five years and Jharkhand will get a strong government,” he said. “Our Government is committed to the development of the entire Santhalpargana including Mihizam. The Jharkhand Mukti Morcha ruled in Santhal Pargana for years but Santhal went backward. The Soren family stalled the development of Santhal.

At Khaira of Nala Assembly seat, the CM held discussion with locals over tea. “Our government has given top priority to dialogue with the people since the beginning.