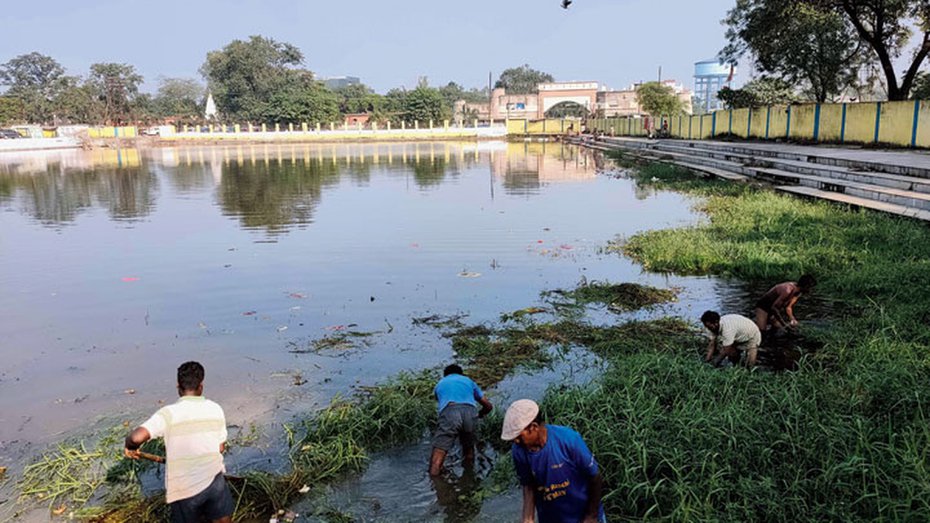 Civic bodies in both Ranchi and Jamshedpur are racing against time to deck up the ghats ahead of the four-day Chhath that begins from Thursday with Nahay Khay.

While heavy rains of last week and subsequent immersion of Kali and Chitragupta idols have increased the workload of Ranchi Municipal Corporation (RMC), the steel city is comparatively better placed with most major ghats in the final stages of being spruced up for the biggest festival of Jharkhand and Bihar.

“We have deputed our enforcement teams at major ghats to prevent dumping of puja paraphernalia,” RMC CEO Manoj Kumar said on Wednesday. “We are planning to depute guards at night from today at the major ghats. We are working against time to prepare the ghats as heavy rains, garbage-choked drains and dumping of idols and puja paraphernalia have compounded our problems. Despite the odds we are trying to prepare the ghats in the best possible manner for the devotees by Saturday,” he said.

Saturday is Pehli Arghya, when devotees offer prayers to the setting sun while standing in water.

“We are trying our best to clear the Ranchi Bada Talab of massive growth of water hyacinth,” Kumar said. “We have pressed into service nearly 15 heavy vehicles and 150 workers to clear the water hyacinth ahead of the festivity. Similarly, workers have been deputed to clean the other major ponds on a war footing under the supervision of specially constituted 10-member team of senior officials. We have appealed to all the (53) ward councillors to spread the message for cooperation in cleaning the ghats.”

The RMC will also be putting up bamboo made structures to demarcate danger zones at the ponds by Saturday morning, said an RMC health division official.

The roughly 30 ghats on the Subernarekha and Kharkai rivers and ponds across the steel city are a tad better prepared.

“We are taking help of (Tata Steel subsidiary) Jusco and other corporate groups (which maintain ponds in their areas) and also employing our resources to clean the ghats,” said Jamshedpur Notified Area Committee (JNAC) city manager Sonal Singh. “We had done the cleaning of the ghats completely after Durga Puja. However, after Kali Puja and Lakshmi Puja, puja paraphernalia and idols had to be cleaned again from the ghats which we are continuing till today (Wednesday). We hope to clean all the ghats by this evening.”

Danger spots at the ghats will be demarcated with red and white tapes by Saturday morning.

Dhanbad Municipal Corporation has completed clean-up operations at almost all the 90 ponds of the coal town except the historic Raja Talab of Jharia and Khokhan Talab of Hirapur.

Dhanbad mayor Chandrashekhar Agarwal, who inspected Raja Talab on Wednesday afternoon, said: “We faced some problem due to huge amount of hyacinth in the pond, but we will hopefully make it ready for Chhath by tomorrow (Thursday).”